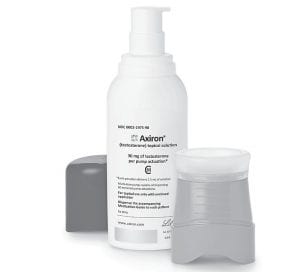 Millions of men have been prescribed the testosterone gel drug Axiron, patches or shots for low testosterone, but it’s not known how much they need or whether this hormone replacement therapy is good, bad or neutral. (AP photo)

TV ads tout testosterone treatments for “low T,” but surprising new research shows a different hormone may play a role in less sex drive and more fat as men age. Estrogen — the female hormone — is needed by men, too, and the study gives the first clear evidence that too little of it can cause certain “male menopause” symptoms.

“A lot of things we think are due to testosterone defi- ciency are actually related to the estrogen deficiency that accompanies it,” said Dr. Joel Finkelstein of Massachusetts General Hospital. He led the U.S.-government funded study, which appears in the New England Journal of Medicine.

Testosterone is the main male sex hormone. Men’s bodies convert some of it into estrogen, and levels of both decline with age. Until now, there was no way to tell which hormone was responsible for complaints of diminished libido, strength and energy.

Millions of men have been prescribed testosterone gel, patches or shots for these problems, but it’s not known how much they need or whether this hormone replacement therapy is good, bad or neutral, Finkelstein said. Doctors don’t usually prescribe estrogen to men; the way to remedy low estrogen is to give them testosterone and let the body convert it.

The study didn’t test hormones as therapy, but explored which ones had which effects. It involved 400 healthy male volunteers, ages 20 to 50, who were given monthly shots of a drug to temporarily reduce their testosterone production to pre-puberty levels. They were then given various doses of testosterone gel or a dummy gel to use. Half also were given another drug to prevent testosterone’s conversion into estrogen.

Designing the study this way allowed researchers to compare the effects of different levels of each hormone on things like strength and body composition.

After 16 weeks, researchers saw that muscle size and strength depended on testosterone, body-fat mass depended on estrogen, and both hormones were needed to maintain normal sex drive and performance.

The results mirror animal research — mice altered so they don’t make estrogen grow fat and have no sex drive. And in male-to-female transsexuals, “there’s actually evidence that when those men are given estrogen, it helps their libido,” Finkelstein said.

The new study was too short to see long- term benefits or risks, such as the effect of testosterone supplements on the heart, mental sharpness, prostate enlargement or cancer. Also, abruptly and artificially depriving men of testosterone the way the study did may not be the same as when it falls off naturally and gradually over time.

Some people call this midlife decline “male menopause” although men don’t menstruate and testosterone doesn’t fall off as sharply with age as estrogen does in women after menopause.

“Andropause would be more reasonable,” since testosterone is an androgen, a male sex hormone, said John Morley, an expert on hormone therapies and aging at Saint Louis University.

He said the study shows a big variability in the amount of testosterone men may need. Doctors tend to try a lower dose and abandon it if it doesn’t work, but some men may need more.

Further research is needed, but the results may boost the case for giving testosterone to prevent frailty in older men, the authors write. Low testosterone may contribute to less muscle and bone strength and mobility, impaired thinking skills, heart disease and other problems.