Low sodium levels cause many symptoms 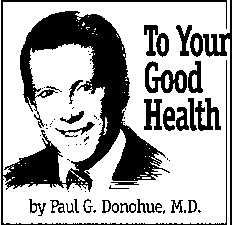 DEAR DR. DONOHUE:
What can you tell me about a low sodium level? My visiting friend (from England) was refused embarkation on his cruise because he was acting belligerent and confused. The ship’s doctor sent him to a hospital. He had scans, an EEG and numerous blood and urine tests. Everything was normal except he had low sodium. His insurance carrier sent a doctor from England to accompany him on a flight back to London. He has since seen his own doctor. His sodium level has risen. What happened to him? — B.L.

ANSWER:
Sodium has many functions. It keeps body fluids at the right level. It maintains blood pressure. It’s essential for muscle contractions. It participates in generating the heartbeat. It carries a positive electric charge, so it balances the negatively charged body substances.

A drop in blood sodium leads to fatigue, nausea and weakness. If the level dips farther, people become confused and dizzy. At very low levels, they could have a seizure and lapse into a coma.

Your friend’s doctor has the task of finding out why your friend’s sodium level fell. In quite a few instances, it comes about from an inappropriate release of a body hormone called ADH, antidiuretic hormone. This hormone stops kidney urine production. The result is too much water in the body. The extra water dilutes sodium and produces a low reading. Liver diseases, troubles with the adrenal glands and a sluggish thyroid gland are other causes for a lowering of blood sodium.

Restoring the body’s sodium content is not too difficult. Tracking the reason why it dropped is.

Has your friend’s mental function normalized now that his sodium level has returned to normal? If it has not, then his doctor has to look for explanations of his erratic behavior that have nothing to do with his sodium.

The booklet on sodium and potassium explains why these minerals are so important and what happens when they are out of kilter. Readers can order a copy by writing: Dr. Donohue — No 202W, Box 536475, Orlando, FL 32853-6475. Enclose a check or money order (no cash) for $4.75 U.S./$6 Canada with the recipient’s printed name and address. Please allow four weeks for delivery.

DEAR DR. DONOHUE:
I have been eating ice cream and cookies sweetened with Splenda for about four years, enjoying them very much and not experiencing any bad side effects. Then someone told me that Splenda is really bug poison and that it has made a lot of people sick, so I stopped using it. I have noticed no improvement, but I didn’t have anything wrong in the first place. I miss Splenda foods. What is your opinion? — N.B.

ANSWER:
Splenda is not bug poison. It’s made from sugar. It’s a product that is 600 times sweeter than sugar. It is not absorbed, so it contributes no calories to those who eat it. It’s FDA-approved, and I trust the people at the Food and Drug Administration more than I trust your informant. There’s no reason for you not to use it.

Some people delight in passing on alarming information. Your “someone” has to be one of them.

letters, but he will incorporate

them in his column
whenever possible. Readers
may write him or request
an order form of available
health newsletters at P.O.
Box 536475, Orlando, FL
32853-6475.