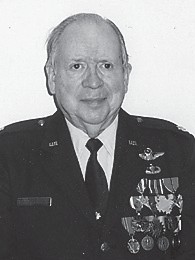 Lt. Col. Kilbourne was born in 1934 in Roda, Virginia, the son of the late Tug and Dora Kilbourne. He graduated from Whitesburg High School in Whitesburg, Kentucky and earned a Master’s degree in Information Systems from University of Southern California. Mr. Kilbourne was a career United States Air Force veteran, achieving the rank of Lieutenant Colonel. He served during the Korean and Vietnam conflicts, earning pilots wings in 1954 and later a flight instructor rating. After an assignment at the Pentagon he graduated from the NATO Defense College in Rome, Italy and had additional assignments at Headquarters US EUCOM, Stuttgart, Germany, and HQS USAF Systems Command, Andrews Air Force Base.

He was a highly decorated veteran receiving two Silver Stars and three Distinguished Flying Crosses as an A-1E Skyraider “Sandy” pilot with the 602nd Fighter Squadron in Southeast Asia in 1967, and received twenty four military decorations altogether. Jimmy would never give up while on a rescue mission and fought to bring everyone home. He wrote of these missions and other pilot rescue missions in World Wars I and II, Korea and Vietnam in his book “Escape and Evasion: 17 True Stories of Downed Pilots Who Made It Back.” He was awarded the Valley Forge Freedom Foundation Award for his poem “He is America” and had recently finished his second novel.

After retiring from the military Lt. Col. Kilbourne served as the speechwriter for the Director of the FAA and continued as a Flight instructor up until his untimely death. He taught pilots for 64 years operating a flight training school at The Winchester Regional Airport.

Mr. Kilbourne was an Auctioneer, a member of Moose Lodge 1283, VFW Post #2123 where he was past Commander, Winchester Civil Air Patrol, Winchester Regional Airport Council, VUMS (Veterans of Underage Military Service), Izaak Walton League of Winchester, Gemological Institute of America as a GIA, 32nd Degree Mason, The Winchester Country Club, and past member of the National Association of Jewelry Appraisers. He attended First Presbyterian Church of Winchester.

He married Charlotte Anne Maggard on September 30, 1956 at Vance Air Force Base, Enid, Oklahoma. She preceded him in death in 2017.

Along with his parents and wife, Lt. Col. Kilbourne was preceded in death by brothers, Walt and Frank Kilbourne and Charles Combs.

Cherishing his memory are his brother Al Howard and his best friends Jim Stevens, Harriet Kibler, Rosemary Halsey and the Kansas sisters.

A graveside service with full military honors will be conducted at 3 p.m. on Wednesday, January 30, at Arlington National Cemetery.

Please gather your courage and love and take car keys away from impaired drivers.