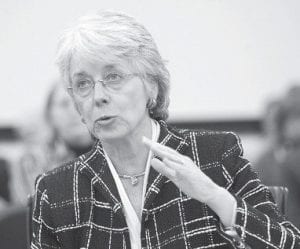 State Auditor Crit Luallen, whose financial reviews have been stinging for some local-level politicians, said in mid-December that she will decide before spring whether to challenge U.S. Sen. Jim Bunning in 2010. (AP Photo/Ed Reinke)

Crit Luallen, the state auditor whose financial reviews have stung some local-level politicians, says she will decide before spring whether to challenge U.S. Sen. Jim Bunning in 2010.

“I am getting a lot of encouragement to consider the Senate race,” Luallen told The Associated Press in an interview last week. “I’m certainly not ruling anything out.”

Luallen, 56, of Frankfort, is one of a handful of formidable Democrats who could enter the race, including Lt. Gov. Daniel Mongiardo and Attorney General Jack Conway.

In a wide-ranging interview, Luallen also discussed a series of financial audits that have unearthed corruption in local governments and led to the prosecutions of 14 people for misconduct, theft and other charges since she took office some five years ago.

As a former state budget director and state finance secretary, Luallen brought a keen understanding of government finance to the auditor’s office and strong convictions about doing things rights, said Democratic Party Chairwoman Jennifer Moore. After taking office, Luallen said she forged a relationship with state and federal investigators so that when her team of more than 100 auditors unearthed corruption, they could readily hand over the information for criminal probes.

“I’m firmly convinced the only way you break what is a cycle of corruption in these counties is to actually get convictions, and get people removed from office so that sends a signal to others and hopefully acts as a deterrent for the future,” Luallen said. “So we’ve been very aggressive about that.”

Luallen’s office, which conducts some 600 audits a year, has also raised concerns about aspects of state government operations. In September, Luallen recommended that political leaders tighten controls on use of the state’s aging fleet of planes. Lax rules about who’s allowed on board, she warned, could lead to abuse.

Even churches, schools and other organizations that raise money through bingo games couldn’t avoid the scrutiny of her auditors. Luallen recommended earlier this year that the Kentucky Department of Charitable Gaming require yearly financial reviews of organizations that raise money through bingo and other games to ensure the dollars reach the intended beneficiaries. Those funds totaled $489 million last year.

A critic contends Luallen may be taking too much credit for the audits in an attempt to polish her political credentials for higher office — in this case, Bunning’s Senate seat. Republican stalwart Larry Forgy, a Frankfort attorney and former gubernatorial candidate, said teams of professional auditors, not Luallen, have done the work, and they would have done it regardless of who the elected auditor is.

Moore, however, said Luallen has excelled in every position she held in state government, including such varied roles as secretary of tourism and secretary of the executive cabinet in former Gov. Paul Patton’s administration.

Moore said Luallen is one of a group of “outstanding Democrats” considering the Senate race. They see Bunning as vulnerable, largely because of the close call he had in his last race when he defeated Mongiardo, then a little-known state senator, by only 23,000 votes.

Mongiardo, a physician in Hazard, said he hasn’t yet decided whether he will make another run for Senate.

“It depends on where I feel like I can do the most good and make the most difference in changing our broken health care system,” he said last week.

Luallen said she will discuss the race with Attorney General Jack Conway, a close friend and political confidant, who is also considering a Bunning challenge. Luallen says if Conway runs, she won’t. If he doesn’t run, she may.

Luallen said family also will be an especially important factor in her decision.

“We have a wonderful life here, a life we enjoy very much,” Luallen said. “So, an important part of the decision for me is whether or not it’s the right thing for me and my family.”

Luallen had considered running for governor in 2007, but decided to pass, citing two unrelated bouts with colon cancer. Luallen said she received a clean bill of health three years after the second cancer was treated and that she has no health limitations.

“I’m great,” she said. “My doctors are very optimistic that I’ve had a full recovery from both cancers. Both were detected in a very early stage and were very treatable. I feel much more confident now about my health, having passed that 3-year milestone.”

Luallen, an art major from Centre College whose first taste of politics was stuffing envelopes as a campaign volunteer for former U.S. Sen. Wendell Ford, said the upcoming race will be expensive. Bunning, 77, a Hall of Fame baseball pitcher, has said he will need to raise about $10 million to be elected to a third term.

With Democrats working hard to increase their thin majority in the Senate, Luallen said the national party will get behind a credible candidate in Kentucky.

“But if you’re going to be successful in this race, you can’t wait much beyond the spring of ’09 to get rolling,” she said.