By MARK HANSEL The Kentucky Enquirer 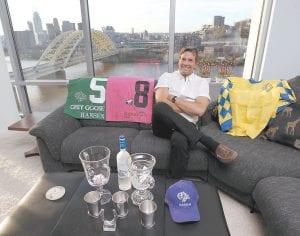 The number seven is considered lucky by many people, but for Dr. Kendall Hansen, his recent good fortune has been linked to the number five.

The race was run on Nov. 5 and Hansen (the horse) wore the number five, identifying his post position, on his saddlecloth.

“It’s funny how the fives have come into play — my age, the post position, the date of the race — it’s crazy,” Hansen said.

Just before Hansen’s final prep race in the Bluegrass Cat Kentucky Cup Juvenile, the owner also traveled to Las Vegas and bet $500 on the horse to win the Breeders’ Cup race — at 40 to 1 odds — that adds up to a $20,000 payoff.

Hansen, who sold a percentage of the horse just before the Breeders’ Cup, also brought home the lion’s share of the more than $1 million purse and collected about $500,000 in Pick 4 wagers on race day.

“ This has been such a great ride and I plan to enjoy it for as long as it lasts,” Hansen said.

That ride might also soon include another of racing’s highest honors.

The Eclipse Awards are given to the champion horse in several categories, including juvenile colt and Hansen was recently contacted by the National Thoroughbred Racing Association about seat reservations for the ceremony.

The event, which takes place in Beverly Hills in January, is much like college football’s Heisman Trophy in that the top contenders in each category are invited so as not to reveal the winners in advance. Union Rags, which ran second in the Breeders’ Cup Juvenile, was considered the favorite for the award before the race, so Hansen would now seem to have an edge in the voting, but nothing is guaranteed.

“It would be so great for him to win and I think he deserves it, but we’ll just have to wait and see,” Hansen said.

The story of Hansen began two years ago when Stormy Sunday, a broodmare owned by the doctor, gave birth to a nearly-white colt by the sire Tapit. Tapit is a well-bred, lightly raced horse that entered stud in 2005 and is now among the top sires in the country.

“I’m glad we bred to him when we did, because his stud fee has gone way up,” Hansen said.

The ups and downs of horse ownership, however, almost cost Hansen his prized broodmare.

“It is expensive to keep horses and I let her go earlier this year,” Hansen said “Then after Hansen won his first race so impressively, I figured I’d better try to get her back.”

The new owner agreed to sell Stormy Sunday back to Hansen for $10,000 and a watch.

“People hear that story and think that must have been some expensive watch, like a Rolex, but it really wasn’t,” Hansen said. “The guy who owned her works the gate at Churchill Downs and he lost his watch while Hansen was working out. He told me he needed a new watch and that had to be part of the deal.”

Hansen had several inexpensive watches and he let the owner have his pick. The guy chose a Tommy Hilfiger watch that cost about $50 and Hansen had his prized broodmare back in the fold.

Hansen had high hopes for the horse that were realized when it won its first two races at Turfway Park this fall, including the Kentucky Cup Juvenile, by almost 26 lengths combined.

Hansen plans to send the Breeders’ Cup Juvenile winner to Florida in about a week and the horse will remain there to train in warm weather before beginning his 3-year-old campaign early next year.

Right now, the plan is to run Hansen in the Holly Bull Stakes in January and the Fountain of Youth Stakes in February, both at Gulfstream Park in Florida. Then Hansen and trainer Michael Maker will have a decision to make.

Hansen has always wanted to run a really good horse in Turfway’s Spiral Stakes, but Maker is leaning toward the Florida Derby.

“It will be a tough call, but Mike has made all of the right choices so far, so I’ll probably listen to him,” Hansen said.

There is a long time between November and May, however, and in recent years many horses that won the Breeders’ Cup Juvenile haven’t even made it to the starting gate at the Kentucky Derby. Only Street Sense, who captured the Kentucky Derby in 2007, won both races.

Hansen, however, is hoping the power of five will help him add another horse to the list.

The Kentucky Derby is always run on the first Saturday in May and next year that date is 5/5.