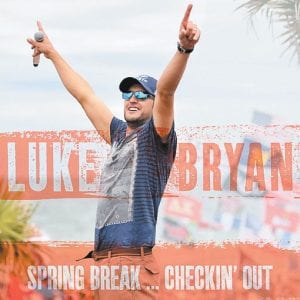 Luke Bryan opens his annual spring-break album with “My Ol’ Bronco,” a song about an aging vehicle that still gets the job done. The Bronco could be a metaphor for Bryan himself — both were born in the 1970s and both have outgrown an affinity for kicking up sand at musical beach parties.

“Checkin’ Out” is Bryan’s seventh spring-break collection in as many years; that’s in addition to four full-length albums since 2007. The 38-year-old CMA Entertainer of the Year understandably feels ready to focus on something deeper than beach-party soundtracks.

His maturity shows in the songs, too. He still celebrates the lighthearted joys mixing sand, sun and surf with liquor and women, as on the funk-dance rhythms of “Good Lookin’ Girl” and “Like We Ain’t Ever” — the latter among the six tunes recycled from Bryan’s 2014 release, “Spring Break 6.” This time he sneaks in youthful drama on “Games” and gets sentimental on “Spring Breakdown.”