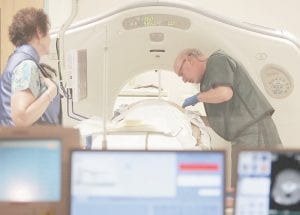 A patient is screened for lung cancer in a CT scanner. New lung cancer screening guidelines from three medical groups recommend annual scans but only for an older group of current or former heavy smokers. The advice applies only to those aged 55 to 74. (AP Photo)

The advice applies only to those aged 55 to 74. The risks of screening younger or older smokers or nonsmokers outweigh any benefits, according to the guidelines.

About 8 million Americans would be eligible for screening under the new criteria, and if all of them got the scans, about 4,000 lung cancer deaths per year could be prevented, said Dr. Peter Bach of Memorial Sloan-Kettering Cancer Center in New York.

He chaired the expert panel that wrote the new guidelines for the American College of Chest Physicians, the American Society of Clinical Oncology and the National Comprehensive Cancer Network.

The recommended screening involves low-dose CT scans, which are a special kind of X-ray that can detect lung cancer early, but also can have false-positive results.

Regular chest X-rays can also detect lung cancer but they provide less detailed images than CT scans, can also have false-positive results and have not been recommended as a screening tool because they have not been shown to save lives.

The guidelines were published online this week in the Journal of the American Medical Association.

Widespread screening will likely lead to some deaths because abnormal results are typically followed by biopsies and other invasive tests that sometimes have deadly complications. Still, the three groups say those deaths would be far outnumbered by people saved from lung cancer deaths by screening.