Lungs keep living after we die 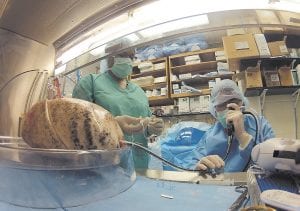 Research associate Lolita Forrest assists Dr. Thomas Egan in testing a set of lungs donated as part of research at the University of North Carolina in Chapel Hill. It’s a little-known twist of nature: Your lungs can live on for a while after you die. The air left inside keeps them from deteriorating right away like other organs. Now an innovative experiment aims to use that hour or more window of time to boost lung transplants by allowing donations from people who suddenly collapse and die at home instead of in a hospital. (AP Photo/Allen G. Breed)

The pair of lungs sits inside a clear dome, gently inflating as doctors measure how well they’ll breathe if implanted into a patient who desperately needs a new set.

It’s a little-known twist of nature — your lungs can live on for a while after you die. The air left inside keeps them from deteriorating right away as other organs do.

An innovative experiment now aims to use that hour or more window of time to boost lung transplants by allowing donations from people who suddenly collapse and die at home instead of in a hospital.

“ There aren’t enough lungs. We’re burying them,” said Dr. Thomas Egan of the University of North Carolina, Chapel Hill, who is leading the project. “It turns out your lungs don’t die when you do.”

This is a new frontier for transplants.

Today, registered organ donors don’t get to fulfill that last wish if they die outside of a hospital. The U.S. doesn’t have a system to recover their organs quickly enough. It can be an added shock to grieving families, and a waste of potentially good organs that might ease transplant shortages. 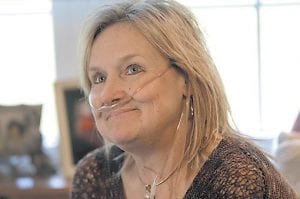 Lisa Bowman sits at her home in Union Grove, N.C. Bowman, who suffers from a lung disease, has been on the transplant waiting list for two years. (AP Photo)

“The general public does not understand how hard it is to become an organ donor. They assume if they sign their card, when they die, then it will happen,” said bioethicist Arthur Caplan of New York University’s Langone Medical Center. “Only 2 to 3 percent of people die in circumstances that let them be organ donors.”

The new study in the Research Triangle area of North Carolina is trying to change that, focusing on lungs because Egan’s research suggests they last the longest.

Here’s how it works.

Someone collapses with cardiac arrest. Emergency workers exhaust attempts at CPR. If the driver’s license lists the person as a registered donor, the local organ recovery agency tracks down next-of-kin for permission to participate in the research.

If that happens within about an hour of death, then workers pump a little air into the lungs to preserve them while the body is transported to an operating room for organ recovery.

Workers wheeled a cooler bearing the first set of lungs donated in the experiment into Egan’s lab for the next crucial step — determining if they’re really healthy.

Inside the science fiction looking domed machine, a ventilator slowly filled the lungs. They resembled a turkey awaiting roasting. Some black speckles on the outside didn’t worry Egan. They’re a sign of city living, or maybe earlier smoking. It’s deeper inside that counts.

Egan infused them with a special fluid that flows like blood normally would. This so-called ex vivo lung perfusion preserves the lungs even longer. It can tell if they transfer oxygen properly or help spot signs of disease. Egan also peeked inside with a bronchoscope, looking for abnormalities.

These lungs didn’t pass the test because Egan found some early disease. But they did show it was possible to get a donation in time to try.

Lungs that do pass will be transplanted into patients willing to take a chance on these nontraditional organs, as part of the study funded by the National Institutes of Health.

“ That would be the greatest thing, to be able to breathe normal,” said Lisa Bowman, 51, of Union Grove, N.C.

Bowman has been on the waiting list for new lungs for two years after a rare genetic disease gradually damaged her own until, she says, it became like “ breathing through a pinhole.” She hopes Egan’s research will help her find a match more quickly.

Some previous U.S. attempts at out-of-hospital donation of another organ, kidneys, didn’t pan out because of logistical hurdles. But transplant specialists are watching this newest experiment closely, saying that if it works, it eventually could open the way to many more donations — not just lungs but maybe other organs, too.

“We’ve had a number of very disgruntled family members that wanted to donate (a loved one’s organs) and weren’t able to,” said Dr. Jeffrey Punch, transplant surgery chief at the University of Michigan. Spurred by that family reaction, in a few months, his team plans to try recovering kidneys from cardiac arrest victims who are rushed to the emergency room but can’t be saved and turn out to be registered donors.

In North Carolina, Egan’s study likewise will try to recover lungs from people who die in the ER as well as in the community.

Today, the vast majority of donated organs come from people who suffer a severe injury and are hooked to a ventilator for days, even weeks, until doctors determine they are brain-dead. Machinery keeps blood and oxygen flowing until surgeons can collect organs deemed healthy enough.

What about registered donors who collapse with cardiac arrest at home, the office or the gym — and efforts at CPR fail? Experience overseas shows it’s possible to take quick steps to preserve and recover their organs. Doctors in Spain have transplanted kidneys, livers and lungs from these unconventional donors. France has reported some success with kidneys.

In the United States, more than 6,000 people died last year while awaiting one of those organs.

Lungs are in particularly short supply. Only 15 percent to 20 percent of donated lungs are usable, often because complications during the donor’s hospitalization damaged them. Just 1,700 lungs transplants are performed each year, compared with nearly 11,000 kidney transplants from deceased donors.

Egan, a cardiothoracic surgeon, said doctors don’t even suggest the possibility of a lung transplant to thousands who might benefit because there aren’t enough donors.

Yet the Institute of Medicine has estimated that as many as 22,000 people a year who die outside of hospitals could be potential organ donors if scientists settle some ethical and practical questions.

Buying time to recover those organs means doing some things not normally done to dead bodies, noted bioethicist Caplan, and that can mean ventilating lungs or filtering blood to the kidneys.

How will grieving families react? Is it possible to tell who’s a registered donor, and find next-of-kin, in time to try?

Dr. Stephen Wall of Bellevue Hospital Center said community and religious groups met with researchers and were interested. But study rules restricted which deaths were eligible, and researchers had just 20 minutes to get initial family permission. In six months, nine deaths were considered but didn’t qualify, often because the deceased hadn’t previously registered as an organ donor, Wall said. New York is among states with low donor registration rates.

Wall’s team is considering trying again with lungs, because of the longer time window.

Lung cells don’t depend on blood flow for oxygen, Egan explained. When the heart stops beating, they use what oxygen is left in the air sacs and airways.

For how long? In a series of experiments with animals, Egan showed lungs stay viable for an hour, or four hours if they are ventilated, before they’re cooled to await transplant.

That ventilation is one key to the $4 million, threeyear study, because when emergency workers exhaust attempts at CPR and declare someone dead, they typically leave behind the breathing tube inserted in the person’s throat. That makes it simple to restart ventilation to preserve the lungs, Egan said.