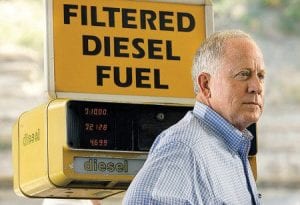 Democratic U. S. Senate candidate Bruce Lunsford stood in front of a diesel fuel pump at a convenience store in Jackson as part of his “on the job”. (AP Photo/Ed Reinke)

Lunsford was pumping gas at a Breathitt County filling station Monday in hopes of tapping into voter frustration with high fuel prices. The campaign stop in Jackson was part of the Louisville businessman’s “On the Job” tour of Kentucky.

Lunsford accused McConnell of being out of touch with Kentuckians and having a record of supporting oil companies. Lunsford is running a TV ad meant to counter a McConnell commercial linking Lunsford with a state law that has led to periodic slight increases in the state gas tax.

McConnell campaign manager Justin Brasell says motorists should thank Lunsford for having a hand in passing the state law years ago while part of John Y. Brown’s administration.