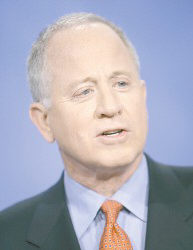 Bruce Lunsford credits his youthful scrappiness for turning him from an undersized guard into an all-conference high school basketball player in northern Kentucky.

Topping out at 5-foot-8, Lunsford never realized his dream of playing for fabled Kentucky coach Adolph Rupp, but he didn’t shy away from mixing it up with taller players in the paint.

“I’m a scrapper,” Lunsford said. “I would get a lot of rebounds for my size.”

Now 60, Lunsford needs such grit more than ever in his latest competition – for a U.S. Senate seat held by the chamber’s Republican leader – four-term incumbent Mitch McConnell.

Lunsford, a Louisville businessman who made a fortune starting a health care company, is one of seven candidates seeking the Democratic Senate nomination on May 20.

Other Democrats in the race are Greg Fischer and Michael Cassaro of Louisville; David Wylie of Harrodsburg; David L. Williams of Glasgow; James Rice of Campbellsville; and Kenneth Stepp of Manchester.

Lunsford promises the same feistiness as a Senate candidate that he’s shown throughout a life that took him from a Kentucky farm to the corporate board room to the winner’s circle as a thoroughbred owner.

“I live with the view that the meek will inherit the earth, they’re just not going to do it anytime soon,” he said. “You’ve got to be a scrapper, you’ve got to fight to get most things in life.”

Lunsford had a stint in state government as commerce secretary to then-Gov. John Y. Brown Jr. Twice, Lunsford has run for governor, losing both times in the Democratic primary.

Lunsford spent about $14 million of his own money in those losing campaigns in 2003 and 2007. He has already spent more than $1 million of his money for his Senate race.

Like his past campaigns, Lunsford portrays himself as a regular guy who through hard work, tenacity and luck was able to live “an American dream.” Growing up on a farm, he toiled in the tobacco fields and fed pigs and cattle. He worked on a road crew to help pay his way through college.

Lunsford does his own grocery shopping and picks up his dry cleaning. The divorced father of three grown daughters washes his clothes, though he concedes, “I may not be the best at it.”

But he also enjoys the trappings of wealth. Lunsford owns condominiums in Louisville, Florida, California, Chicago and Saratoga Springs, N.Y.

In March, Lunsford had a previous commitment that kept him from attending a key Democratic event in western Kentucky – he was at the Dubai World Cup horse race in the Middle East.

To get a glimpse into everyday working lives, Lunsford started an “On the Job” tour in which he spends part of a day pitching in at blue-collar workplaces, such as a central Kentucky lumber yard.

“He’s not afraid to work; I like that,” said Jim Bowman, a supervisor at the Harrodsburg lumber yard.

Meanwhile, Lunsford has patched up his relationship with unions that viewed him with skepticism or outright hostility in last year’s gubernatorial primary. The rocky relationship was a carry-over from 2003, when Lunsford supported Republican Ernie Fletcher in the general election for governor.

Lunsford made it a priority this year to win over organized labor. His efforts paid off when he won endorsements from the Kentucky AFL-CIO and Change to Win, a coalition of several unions in Kentucky.

He got a rousing ovation from hard-hat-wearing laborers in picking up an endorsement recently from a carpenters union in Louisville. In his speech, Lunsford noted his personal ties to organized labor – his father was a union worker at General Electric.

That impressed union members like Rico Mooney. “I feel confident if he’s got union in his blood, he ought to stand up for us,” he said.

What seems like a charmed life for Lunsford has been touched by tragedy and hardship.

Lunsford’s mother died in an automobile crash when he was in law school.

“My mom was my best friend,” Lunsford said, his voice cracking and his eyes welling. “I never went a day without talking to her. It was a void that was hard.”

Then there was Lunsford’s roller-coaster ride as the top executive of Vencor Inc., a Louisville based nursing home and hospital company he built from scratch in the 1980s.

Vencor climbed to Fortune 500 status with over 300 nursing homes and dozens of long-term hospitals but went into a tailspin amid heavy losses and sought protection under the Chapter 11 bankruptcy code in 1999. The company reorganized and emerged from bankruptcy in 2001 and was renamed Kindred Healthcare.

Before the bankruptcy filing, Lunsford split Vencor into two companies. He said he did it to protect tens of thousands of patients, shareholders and employees.

One company retained the Vencor name and remained a nursing home operator that eventually became Kindred after the reorganization. The spinoff company, Ventas Inc., owned those nursing homes, leasing them to Vencor.

With the split, Vencor stockholders received shares of Ventas, which remained afloat during Vencor’s bankruptcy proceedings and is a successful company today.

Lunsford remains a big investor in Ventas stock, whose value has soared since 1999.

There were other problems at Vencor. The company agreed to a settlement with the government that included $104.5 million to resolve allegations the company submitted false claims to Medicare and Medicaid. Vencor admitted no wrongdoing as part of the settlement.

Fischer, one of Lunsford’s opponents in the primary, has tried to capitalize on Lunsford’s past by running a television ad reminding voters of Vencor’s problems. Lunsford calls Fischer’s ad “remarkably inaccurate” and ran his own ad trying to undercut Fischer’s attack.

But Lunsford’s ties to Vencor still sour how some view him as a candidate.

In a 2003 campaign commercial run by then-gubernatorial candidate Ben Chandler, Jeri Stevens said her mother was abused at a Vencor facility in Casey County in south-central Kentucky. Stevens appeared recently at a Fischer campaign event, where she got in another dig at Lunsford, saying “As far as I’m concerned, he didn’t run Vencor very well, so how can he help run the country very well?”

Lunsford said those turbulent days give him an appreciation of the financial worries faced by Kentuckians.