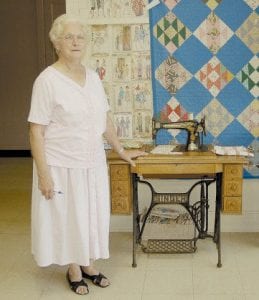 Mable Johnson is proud of the antique room in the center where older items from the Hemphill community are displayed.

To most people who are familiar with Hemphill, one name is synonymous with the Hemphill Community Center.

Mable Johnson, of Jackhorn, has spent countless hours making the center a place that ties the community together.

When she’s not watering flowers she planted, cleaning the building or showing people around the Hemphill Community Center, Mrs. Johnson walks two miles a day around the track located near the center.

Mrs. Johnson said she goes to the community center three or four times a day. She unlocks the gate in the mornings and locks it in the evenings.

“I come and help do what I can. If you want to get away from home and all the hassle, come here,” said Mrs. Johnson.

The 71-year-old grandmother of nine and great-grandmother of 10, played an active role in obtaining the old Hemphill Grade School building as a center for the whole community to enjoy.

“Practically if Mable wasn’t there, I don’t know what we would do. She’s the backbone that holds it all together,” said Teresa Fox, who was a kindergarten aid at Hemphill Grade School.

Mrs. Johnson said the school, which was erected in 1948, closed in 1996. The building was still used during elections as a polling place and she said it was sad to visit the building after it had closed.

“It smelled. It was dirty. Spiderwebs were everywhere. Some women started talking about wanting to use the building as a center,” said Mrs. Johnson.

Mrs. Johnson said it was important the community use the building “because the people had nowhere to meet or have public meetings.”

Johnson and a group from the community started attending Letcher County Board of Education meetings and talking to local politicians about obtaining the building. Eventually, in 1999 the building reopened as the Hemphill Community Center.

Mrs. Johnson is proud of the center and is eager to show off different rooms that are special to the community.

The building has a memorabilia room that is full of memories and history from the Hemphill Grade School. One wall is covered with school photographs from many years back. Many different athletic uniforms adorn the school. Mrs. Johnson is proud to point out her eighth-grade school photo from 1951. People can learn a lot about the history of the Hemphill school by looking through the items on display.

Mrs. Johnson said people can donate items to have displayed in the memorabilia room.

One of Mrs. Johnson’s favorite rooms is what she refers to as the antique room. It contains old items that are similar to items used when she was a little girl. She is partial to an old Singer sewing machine that looks like one on which she learned how to sew.

The center has a large, open room that is used for family reunions, wedding receptions, and birthday parties.

Johnson said she thinks people in the community love having a center and appreciate all it has to offer.

“When there is a death, they call and ask if they can have a dinner here. We help out when we can. We bring food and help them serve the food,” said Mrs. Johnson.

Many people from the community come every Friday night to hear and dance to bluegrass music that is played in this large room.

Mrs. Johnson was also instrumental in establishing the Letcher County Coal Miners’ Memorial, which is located on the grounds of the center.

“Coal mining has been a part of my life. I lost three brothers in the coal mines and our only son,” said Mrs. Johnson.

Mrs. Johnson said her husband, father and all nine of her brothers were coal miners.

“I was really pleased when some of them came up with the idea to remember our coal miners,” said Mrs. Johnson.

Over the years she has spent a lot of time at the Hemphill school, as a student herself and then when her children went to school there. She was a library aid at the school for several years. She remembers how involved parents used to be helping out with concessions at ballgames and at fall festivals. To her it seems natural to continue to spend her time at a place where she grew up.

Fox said Mrs. Johnson can sense when community members are having a hard time and she always manages to help them through those tough times.

“She’s a mommy to all of us. She’s just a jack of all trades,” said Fox. “She’s just a great person. She is always there for everybody.”

Aileen Meade, of Jackhorn, is Mrs. Johnson’s best friend and has been her walking partner for 26 years. She said Mrs. Johnson “is a well-respected lady in the community.”

“She’s a wonderful person to the community – a mom, a neighbor, a friend,” said Meade.