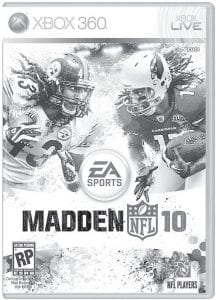 Football fans have grown accustomed to spending their Sundays in front of gigantic high-def TVs, and they can’t just drop their visual expectations when the game goes virtual.

EA Sports exceeds those expectations with “Madden NFL 10” ($59.99; Xbox 360 and PlayStation 3), and the 21-year-old franchise has delivered its most striking, realistic looking football video game yet.

Athlete and stadium models that looked great last year jump off the screen with improved lighting effects and the addition of depth of field, which blurs out the background to make the foreground appear more vibrant.

Players can customize their team’s game day look using pieces from home, away, alternate and classic uniforms, and the game’s TV-like production is enhanced with varied camera angles between plays and on kickoffs.

Game play doesn’t undergo a drastic overhaul from “09” — and that’s a good thing — as the developers at EA’s Tiburon studio polished and revamped a ton of onfield animations, especially with tackling.

Running backs fight to stay upright and keep their feet moving to fight for a couple extra yards. Defenders dive low to trip up a receiver trying to eke out extra yards on a cross route.

The game added gang tackles, and up to nine players can push a pile back behind the scrimmage line or toward the first-down marker. Refs even blow a play dead when an upright pile stops forward progress without falling.

A new mini-game adds interactivity to fumbles, letting players mash buttons to fight for the ball in a pileup. This could get annoying if it happened on every loose ball, but it’s used sparingly when appropriate.

Another new feature is the controller will rumble when a rusher nears the quarterback, allowing those with pocket presence to scramble to keep a play alive. And unlike previous “Madden” versions in which the passer was either sacked or got the throw off, a clutched quarterback can inadvertently slam a ball into the ground or toss a lob that’s up for grabs by lumbering linemen.

Reception animations look more realistic, even on replay, and I even pulled off a David Tyreestyle helmet catch in the end zone during a brief Super Bowl moment.

EA Sports has long used the “It’s in the game” tag line for its games, and the phrase definitely applies here.

Zebras consult on whether a ball carrier crossed the goal line and will call for the chain gang on questionable first-down conversions. Coaches berate quarterbacks after a careless interception and shake hands and chat with their rivals after the game.

The game’s incredible online Franchise Mode is back, letting Internet-connected players form leagues, conduct drafts and compete while managing rosters and transactions through a Web browser. A new two-player online co-op mode provides a way for friends to team up.

Frankly, it’s a struggle to come up with criticisms for “Madden NFL 10,” but even the 16-0 New England Patriots lost a Super Bowl — so here are a few.

The computer always seems to be able to pull off a play that I can’t do, but maybe it’s my lack of talent since I’ve been whining about that since “Madden NFL 94.” And there’ll always be that occasional weird animation, such as a 360-degree arm movement that surely should have brought out the injury cart.

What else? Well, those sideline photographers wearing the red NFL vests don’t follow the ball carrier with their lenses.

The attention to detail in “Madden NFL 10” is astounding, and it’s almost worth giving others the controls for a game or two and just sit back and take in all the visuals.

While EA stepped up the realism for the Xbox 360 and PlayStation 3 “Madden” versions, it further pushed its Wii version ($49.99) away from a sim into a family friendly arcade game.

As expected, the graphics come nowhere near its big brother, but the game is fast and fun, and the Wii’s motion controls make it more interactive.