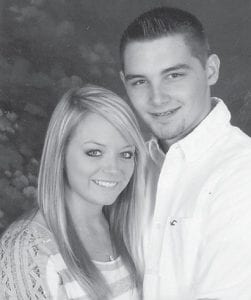 Kristin Savannah Bentley of Cromona and McKenzie Hayden Smith of Whitco will be married June 15 at Millstone Missionary Baptist Church. She is the daughter of Stephen and Pat Bentley of Cromona. He is the son of Ricky and Cecilia Smith of Whitco. Miss Bentley is a graduate of UVA-Wise with a bachelor’s degree in science and nursing. She is employed at Norton Community Hospital. Mr. Smith is a senior at Alice Lloyd College and is planning to attend dental school. The custom of an open wedding will be observed. Everyone is welcome to attend. The couple will reside in Whitesburg.

I want to wish my husband Lee Roy a happy anniversary. It was on June 9, and it was our 29th. We had family and friends over for a wiener roast and made S’mores on Saturday evening. It doesn’t get any better then that.

Mandy Rogers of Elk Creek had surgery a few weeks ago at the WARH and had to spend a few days in the hospital. She is now doing better.

My heart just breaks for the family of Carrie Cornett of Blackey, who passed away suddenly on June 4 after suffering a heart attack. Carrie was the sweetest person. I talked to her a lot on Facebook. She was 61.

My sister Debbie Fugate, her husband Duke, daughter Shanna and grandkids Gavin and Emma Leigh, and Gary’s girlfriend Amber, all spent a few days in Tennessee last week. They went to the Titanic exhibit (Miss Em loves the movie) and stayed at the Wilderness of the Smokies. They had a great trip.

Happy anniversary wishes to Alan and Linda Bates of Elk Creek, who celebrated their 36th year together on June 3.

Happy birthday wishes to Mae Williams of Blackey, who turned 85 on June 6. She had lunch with friends at Phyllis Adams’s home on Elk Creek, and had dinner with family at the Pine Mountain Grill.

Wanda Long of Gordon has been released from the hospital after suffering a heart attack on Friday. Her sister, Brenda Caudill of Blackey, said they did a heart catheterization and balloon procedure.