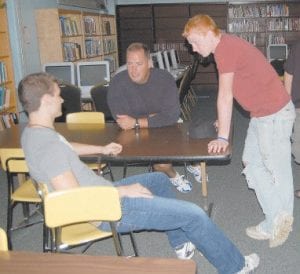 Larry Maggard, who has been an assistant coach at Letcher County Central High School for the past four years, knows equipment must be replaced, new uniforms are needed and the locker room is “in really, really bad shape.”

“It’s a huge undertaking,” said Maggard. “I went from some of the best facilities in the state to some of the worst.”

“We are going to have to teach these kids how to win,” said Maggard. “They are not used to winning. That’s going to be a big hurdle for us to show these kids.”

Maggard was introduced by Jenkins Independent Schools Superintendent Debbie Watts as the head coach to 30 male students interested in playing football on June 11.

“Go with the flow and I promise you good things will come and you will get 100 percent out of me,” Maggard told his new team. “I promise you it is a better road ahead for everybody.”

“I know that Mr. Maggard will make them come to school, work on their grades and stay out of trouble,” said Carroll.

Maggard told the team he takes care of discipline problems and expects his players to be respectful.

Maggard told the players they are going to be doing stuff this season that they have never done before.

“We’re going to try to win a playoff game,” said Maggard. “We are going to be as successful as we can. If you are committed, things will pay off.”

Maggard, who lives on Lakeside Drive, said he has an open door policy and expects lines of communication to stay open. He said he will be texting his players by cell phone and will be checking on them over the summer.

Although the group of boys stayed quiet during most of the informal meeting on June 11, players expressed concern about uni- forms and equipment.

“You’re not going to look like a bunch of rag tags,” said Maggard. “You look good, you feel good. You feel good, you play good.”

Watts assured the team they would have everything needed to play football.

“This football team is going to have what it needs,” said Watts. “We are Jenkins and we are going to be number one in everything we do. When you work as hard as you can and give 110 percent, you gain the respect of everyone.”

Maggard said the community will “see a more organized, more disciplined football team.” He said the players will be more energetic, have a stronger work ethic and will have fun.

Maggard said he took the position for “the opportunity for me to build a team from scratch.”

“I’m so excited,” said Maggard. “I’m thrilled to death and can’t wait to get started. We are going to put Jenkins back on the map and the foundation starts today.”