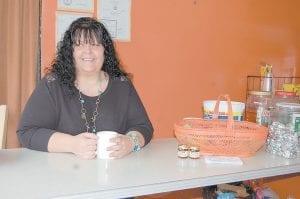 Railroad Street Mercantile owner Kae Fisher shared a laugh with a customer late last week. The new store offers downtown Whitesburg residents and employees a chance to buy a gallon of milk on Main Street for the first time in years. (Photos by Sally Barto)

In its first full week of business, a new store that sells “a little bit of everything” has proven that people who live or work in downtown Whitesburg will buy everyday items without leaving Main Street.

“Everything I did, I did on a small scale,” said Fisher. “I want to be their one-stop shop until they can make it to the grocery.”

Fisher estimates that 46 apartments are located within walking distance of her store.

Located at 23 East Main Street, Railroad Street Mercantile occupies the 700- square- foot space where Ramey’s Diner and Clara’s Restaurant once were based. East Main was known as Railroad Street when trains carried coal and passengers through town. 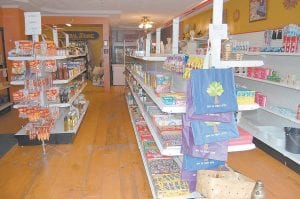 Fisher attended Whitesburg High School in the 1970s when the L&N Railroad still moved coal and other items such as lumber through Whitesburg.

After deciding she wanted to open a small store and researching the best location for such a business, Fisher came across the observation that the best spaces are located near the busiest intersection in town.

To get an idea of how much foot traffic passes through the east end of downtown, Fisher spent several hours sitting near the intersection of Main Street, the ramp to the Whitesburg bypass, and College Drive. She was surprised to see the large number of people she did.

“That’s what made me make my decision,” said Fisher.

Next, she would need a building in which to locate the store. A few feet away from the intersection sat the old diner building. City Hall, the Whitesburg Fire Department and a handful of other business are located in close proximity.

“I just kept coming by and looking at it and I saw really good potential,” said Fisher. 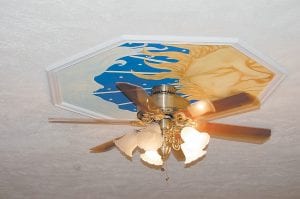 In August, Fisher rented the space. With the help of family and friends, she and husband David completed the renovation in about two months.

“We worked hard,” said Mrs. Fisher. “We’d be here until 4 a.m. I wanted a real comforting place — a place where people could bring their kids.”

A man and his young son who live in an apartment building near Railroad Street Mercantile stopped by the store Friday so the boy could buy an ice cream. Fisher already knows the boy’s name is Johnny, and she welcomed him back into her store.

“It’s been pretty cool,” Fisher said. “I’m shocked. There is life down here.”

“Our neighbors here have been fantastic,” she added. “They shop here and tell us how eager they are for us to be here.”

Fisher, who tended bar at Summit City the last four years, said customers there would frequently ask where they could find a store downtown that sold common items such as cigarettes, Band-Aids, Tylenol, cough medicine, diapers and pet supplies. All can now be found at Fisher’s store. 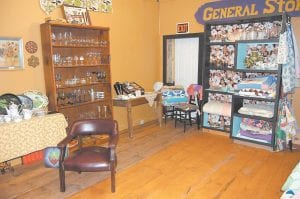 Quilts, art, and antique barware are for sale at Railroad Street Mercantile.

Fisher said she has to mark up the wholesaler’s prices “just a little bit,” but will strive to keep them as low as possible. The store also offers hot tea, hot cider, hot chocolate and coffee.

In addition to selling grocery and convenience items, art and handcrafted items are also sold at Railroad Street Mercantile.

“I didn’t want it to be a convenient store,” said Fisher. “I wanted it to be a little bit of everything.”

A collector of antique barware, Fisher has even put some of the pieces she has obtained up for sale. Some of her friends also are consigning items there.

While Fisher is careful in picking what items she chooses to offer in the shop, she says trial and error will be involved in determining what will be offered permanently.

“I want unique finds,” said Fisher, who sold a quilt and afghan on Friday in addition to groceries. “There’s a lot more coming.”

David Fisher is a local farmer and plans on selling crops he will raise and can. He is one of 80 licensed micro-processers in Kentucky.

If Kae Fisher looks familiar to you, it’s probably because you remember her from one of the many jobs she’s held over the years in local businesses past and present. In addition to Summit City, she has worked at Suburban Motel, Ramey’s Diner, Q.R.S., Dawahare’s, The Courthouse Café, Cozy Corner, Kentucky Fried Chicken, Secret Garden, Pine Mountain Grill, Showtime Video and Las Penas.

After working numerous jobs in Letcher County, Fisher decided it was time to do something different.

“I was ready for changes in my life,” said Fisher. “All my life I have worked for other people. It was time for me to do something for myself.”

Her new store is fast becoming a place where people gather and visit.

“I don’t care about becoming wealthy,” said Fisher. “I just want to pay my bills and enjoy my time on this planet.”

“Come and check it out and see what you think,” said Fisher.