Main Street store to close after 16 months of ‘breaking even’ 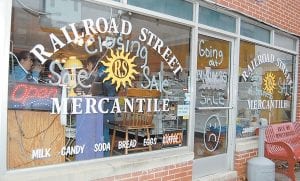 Kae Fisher wishes she had a dollar for every person who has walked into her small general store located in downtown Whitesburg and said, “You have a little bit of everything,” and then walked out the door without buying anything.

This is just one of the many thoughts Fisher ponders as the final closing of Railroad Street Mercantile — the store she opened 16 months at 23 East Main Street — grows nearer. She also can help but wonder whether small business is a thing of the past in this region.

While Fisher has managed to “break even” since opening the store across the street from City Hall, she was never able to pay herself regularly.

“I haven’t gotten a payday since I opened the store,” said Fisher, of Little Cowan, “(but) I managed to pay my bills.”

“I don’t know if it is the economy. Maybe people are counting every dollar,” she added.

Fisher said it is difficult for smaller stores like hers to order from wholesale companies because minimum orders must total $800. She couldn’t find a distributor to deliver milk to her store and was told that she should find milk on sale and buy it herself. 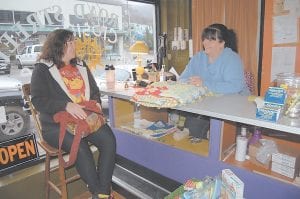 ‘THEY MISSED OUT’ — Pat Spears of Kona (left) and Kae Fisher talked last week after Spears bought a vintage homemade quilt, a hair bonnet and an aluminum pan from Railroad Street Mercantile. “Her stuff was priced reasonably,” said Spears. “She is friendly and outgoing. If you are looking for something unique, this is the place to find it. I don’t know why more people didn’t take advantage and come here. They missed out.” The store is scheduled to close at the end of this month. (Photo by Sally Barto)

“That makes it hard on a small business,” she said.

Despite the challenges she faced, Fisher, 55, thought she would own and operate Railroad Street Mercantile for years to come.

“I absolutely loved my business,” she said. “I loved my shop.”

“ I was naive about a lot of things,” said Fisher.

For instance, she learned that it customarily takes about two years for a new small business to turn a profit and Fisher said her store was on its way.

Fisher took her financial advisor’s advice and asked the owner of the building, Aileen Howard of Neon, to lower the monthly rent from $700 to $500. To Fisher’s surprise, Howard said she had decided to stop renting the building where Ramey’s Diner and Clara’s Restaurant were once based. Howard is interested in selling the building for $100,000, an amount Fisher said she couldn’t afford. The building sat vacant for eight years before Fisher moved in.

“I found out at the end of November,” said Fisher. “I respect her right. It is her building. She can do what she wants.”

Other buildings are available to rent for less in downtown Whitesburg, but Fisher said the spaces are either too large or two small.

“I had the perfect size for what I needed,” she said.

Fisher is thankful that she didn’t take out a loan to start her business and “won’t owe anyone anything” when she locks the store’s front door for the final time.

In addition to hoping she would earn a profit, Fisher started the store to give people who live or work in downtown Whitesburg the chance to buy everyday items without leaving Main Street. She named the business Railroad Street Mercantile because East Main Street was formerly known as Railroad Street when L& N Railroad trains carried coal and passengers through town.

After renting the building in August 2013, Fisher and her husband Dave — with the help of friends and family — spent two months renovating the first floor. The store opened October 18, 2013, and 20-dozen farm fresh eggs were sold during the first full week of business. Milk, bread and artichokes were also popular items, but pickled bologna and pickled eggs were the top sellers. Fisher said fresh organic meats also sold well.

After being open for a while, Fisher learned that not all items sell quickly, particularly some perishable foods. Fisher said she was amazed at how much she had to throw away. One day in late August she discarded 11 cabbage heads. The store eventually stopped carrying bread and milk after she got tired of throwing away expired product.

On a recent day when some downtown businesses were closed because of bad weather, Railroad Street Mercantile was open. A $1 soft drink was the only item sold the entire day.

Fisher will remember fondly the loyal customers who came into the store nearly every day and bought items such as cereal, chips, candy, snacks, spaghetti and tuna. She is concerned for the people (she knows of at least eight) who came into her store near the end of each month and asked for credit “to keep food on the table.” She honored their request, and each of them would come in at the beginning of each month and pay.

Fisher said she enjoyed meeting people who came to her store and also liked seeing familiar faces, too.

“I will miss the people,” said Fisher.

She is also appreciative to her son, Dillon Fisher, who moved from Richmond to Letcher County to work at his mother’s store without pay.

Fisher announced the store’s closing on December 29 through the social media site Facebook.

“It has been amazing the people who have reached out to me,” she said. “I want to scream at them ‘Shop with me!’”

Small businesses won’t succeed in Whitesburg unless community members are willing to shop there, Fisher said.

“ If people truly want businesses downtown — take that extra step to park and visit those places,” she said. “Don’t just say it to be cool. Shop local.”

Fisher said she hasn’t decided what she will do after the store closes for good on January 31.

“I’m so lost right now,” she said. “I just don’t know what I am going to do. I know I am going to take some time to clear my head.”

In the meantime, Fisher, who works part time at Las Peñas, a Mexican restaurant in Whitesburg, will make jewelry and paint.

Fisher has held many jobs over the years, but Railroad Street Mercantile was her first go-round as an owner. In addition to Summit City, she has worked at Suburban Motel, Ramey’s Diner, Q.R.S., Dawahare’s Department Store, The Courthouse Café, Cozy Corner, Kentucky Fried Chicken, Secret Garden, Pine Mountain Grill and Showtime Video.

Until Fisher turns the key to the front door for the final time, she will be at Railroad Street Mercantile greeting those who walk into her shop with a smile and hoping they will take advantage of the marked down merchandise, some of which has been reduced by 50 percent.

Fisher then asked: “ Was it worth the heartache?”

Before she could answer her question, Fisher remarked that the store’s popular farm fresh eggs are produced by 18 chickens that belong to her and her husband.

This brought yet another valid question by Fisher: “Now that we’ve got all these chickens,” she said, “what are we going to do with all these eggs?”