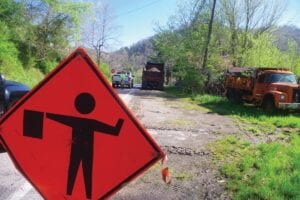 PAVING BEGINS – It’s asphalt season in Kentucky. Road crews began paving KY 7 North and preparing to pave KY 7 South this week, and announced other roads that will be paved in Letcher County this year.

It’s springtime and the potholes have blossomed, but the state Highway Department has announced it plans to nip the problem in the bud on some Letcher County highways.

Paving began this week on KY 7 North with milling and repaving of a 3.8-mile section of the two-lane highway from KY 1410 to Indian Creek Road. Road crews also began filling the shoulders and clearing ditches and culverts on KY 7 South in preparation of milling and paving.

That work is planned to go from KY 588 at the Blackey Bridge to the junction of KY 7 and KY 15 at Sawdust Junction, and then up four-lane and three-lane KY 15/7/160 at the railroad tracks at KY 15. That project will repave 8.4 miles of road.

“The projects start with milling the pavement, then repaving both stretches of highway. During this process the four-lane at Isom will be down to two lanes,” District 12 Department of Highways spokeswoman Sara George said. “Lane closures will also occur on the twolane stretches of roadway for both work zones, alternating as one lane is paved and work moves to the other lane. Work hours will be 7:30 a.m. until 6:30 p.m. Monday through Friday, dependent on weather. Speed will be reduced in the work zones and motorists are advised to pay attention to signs and flaggers.”

The two projects are part of major repaving work planned in Letcher County for this spring and summer. The state also plans to repave US 119 from the end of the four-lane near Mayking Volunteer Fire Department north 2.6 miles to KY 805 at Kona.

The state will pave a different section of 119 and 23, also. Split into two projects, the first will pave 1.1 miles from the Virginia state line at Pound Gap to the Whitesburg exit. The second, 1.148 miles, will pick up there and go to the bridge crossing KY 805 at Jenkins.

In addition to those projects, the state Highway Department will use “microsurfacing polymer” to cover 6.5 miles of asphalt from KY 588 near Hot Spot to KY 15 at Van. Microsurfacing is a cold paving process that uses a mixture of asphalt emulsion, aggregate, water, a polymer, and a filler such at Portland cement, hydrated lime or aluminum sulfate.

The material is intended to bond to the asphalt, fill imperfections in the road, and extend the life of the pavement. The process has been used for some time in other states, but Kentucky is only now beginning to try it.

George stressed that the projects listed this week are not the only things the agency has planned for this year. It doesn’t include patching and minor paving projects or “Bridging Kentucky” projects. She said the district is planning to ask for money for another major project on KY 7 from Blackey to the Perry County line next year.

“It really needs to be a major paving project, but the money only goes so far,” she said.