Making maple syrup is a labor of love 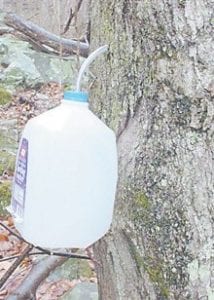 COLLECTING SAP — Sap from a sugar maple tree is collected in one-gallon water jugs. It will take all day to boil 20 gallons of sap to make one-half gallon of syrup.

It was a cold, rainy, morning in late February and Granville ‘The Mountain Man Burke,’ age 76, with his brother- in- law Truman Conley, age 83, were busy erecting a makeshift canopy over their homemade wood-burning stove in Truman’s back yard in Jenkins.

The weather didn’t dampen their spirits as they excitedly prepared for a long day out of doors making genuine Kentucky mountain maple syrup. Truman and Granville are not only brothers-in-law they are best friends who have spent decades enjoying hunting, fishing, canoeing, camping, spelunking, rappelling and other outdoor activities while preserving many mountain traditions.

Granville had stoked the stove with softwood and had whittled wood shavings on a few pieces to use for kindling. When the first match was touched to the shavings, the wood started burning eagerly. In a few minutes he added a few small sticks of hardwood to build a hotter fire.

I inquired about the origin of their quaint, little stove as the sweet smell of smoke rose from the stovepipe, which extended just beyond the canopy. “My son Jimmy made that out of his old toolbox when he retired from working in the coal mines,” said Truman with a chuckle. 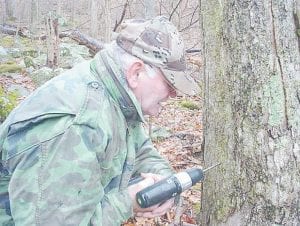 It obviously was nothing fancy, yet totally functional. A stainless steel pan sat on the flat top of the stove and the two were obviously built to be compatible. “I bought that pan at a flea market years ago,” said Granville with his everpresent, friendly smile.

Both men were bundled for the cold, blustery weather, for the process would require their vigil for the entire day. Rain blowing in on the hot stove sizzled and quickly evaporated in a steamy haze.

This eager observer asked a lot of questions and they willingly shared their self-educated knowledge of the ancient craft. “Is this something our ancestors did here in the mountains and passed down through generations?” I inquired. I was surprised to learn that neither of the two had made maple syrup before they decided to give it a try beginning about five years ago. 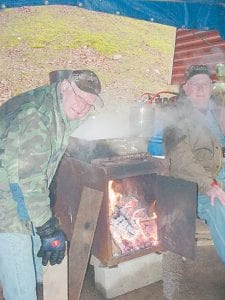 Soon the stove and the cooking pan were hot and they decided it was ready to pour the first round of sap in the pan. Truman strolled over to his garage and got a five-gallon jug of clear sap out of the refrigerator. “We ran one batch last week and this batch will probably be our last one this year. The sap has just about quit running. The sap starts rising from the roots of the sugar maple trees in January and the cold nights and warm days create the pressure differential inside the tree to make it ideal for collecting the sap. When the trees start budding you know the season is about finished,” said Truman.

“When the sap is running good,” said Granville, “we can collect about a gallon from each tap overnight. We can sometimes put two or three taps on a bigger tree”. Granville helped Truman hoist the five-gallon jug and poured its entire contents into the pan. I tasted the sap and it looked and tasted like the purest of clear spring water with just a very faint hint of sugar.

Truman pulled a chair as close to the stove as he could stand the heat for he would be observing the sap all day, and Granville threw a few more pieces of hardwood on the fire. A slow fire that is not too hot is ideal. You have to bring the sap to a boil, but if you get it too hot it will burn the syrup.

While Truman attended the stove Granville demonstrated how he had developed his own system for collecting the sap. He took a cordless drill with a 3/ 8- inch drill bit and drilled a hole about 2 ½ inches deep into a nearby sugar maple tree at a slight upward angle to facilitate the drainage.

They had saved onegallon water jugs and used them to collect sap over a period of several days until they accumulated 20 gallons. “Twenty gallons is about all we can process in one day,” said Granville.

He inserted a clear plastic tube into the hole and ran it through a hole he had drilled in the lid of the jug. He then drove a nail into the tree and used a wire to build a device to anchor the jug to the tree to keep the wind from blowing it away.

“We got a lot of information from the Internet and books and catalogues about how the folks make maple syrup in the northern states. A lot of the information was designed to sell equipment, but we used our own ingenuity to do it just as good or better with homemade devices. “

Making maple syrup in America is as old as the country. When the first colonist came to America in the 1600s, they did not bring the technology with them. The Native American Indians had learned about the sweet sap that could be drained from the abundant maple trees in the north.

Today, 400 years later, most maple syrup is still being made in the northern states including New England states, Michigan, Pennsylvania and Wisconsin. The industry proliferates more so in Canada than in the United States. Canada produces approximately 80 percent of the world’s supply of maple syrup. The reason for using the maple leaf as the nation’s symbol is obvious.

Although the sugar maple is more frequently tapped for its sap than the red maple or the black maple, it was found that the sugar maple has the highest concentration of sucrose in its sap.

In Kentucky, where the climate is favorable for both, it was learned that the inherent conditions were more favorable for making sorghums. Sugar cane produces about 10 percent sucrose compared to about 2.5 percent from sugar maple trees. If you run the math on the equation you will see that it takes about 40 gallons of sap to produce one gallon of maple syrup compared to 10 gallons of the juice from the stalk of sugar cane.

The fact that the sugar cane is easier to harvest and store and the sorghummaking process is usually done in the warm October weather rather than in the middle of winter, makes sorghum a more viable cottage industry.

I tasted the syrup many times, and from one hour to the next I could detect the sweetness was more pronounced. Truman kept a metal teapot sitting on the stove filled with sap so as to preheat the juice before it was added to the pan very gradually.

“Keeping the sap just above the boiling point is critical,” said Truman. Throughout the day Granville stoked the fire and dipped the foam from the surface of the syrup.

“You can order a bunch of fancy instruments to help monitor the density and the sugar content”, said Granville, “but after you have made one batch you can use your own judgment to tell when it is right.”

Periodically I moved downwind so I could inhale the sweet, distinct aroma of real maple syrup. When the fourth and final jug of sap was emptied into the pan, I knew that heaven was near.

The clear sap was now turning to a golden, light amber hue and the syrup was beginning to thicken. “No one will have to tell you when it is finished,” said Granville, “the vapor will gradually slow and the bubbles in the boiling process will diminish. Then suddenly the thick syrup will rise like molten lava from a gentle volcano.”

After about eight hours the crew decided to let the fire burn out and let the syrup cool before bottling. Their yield for all of the efforts of collecting the sap and cooking all day was about five pints. Was it worth all of their efforts? You had better believe it is.

You haven’t lived until you’ve eaten a hearty meal of a stack of flapjacks doused with homemade maple syrup and served with fresh pork sausage and a hot cup of boiled coffee. I know what you are thinking. Where can I get me some?

I guess you will have to buy some real Vermont maple syrup to get even close to the experience of making your own. Commercially you may have to pay a hundred dollars for a gallon of pure maple syrup. That is not a bad buy considering all of the work that goes into the process to recover only 2.5 percent syrup.

For Granville Burke and Truman Conley, it’s not about money; it’s about refining and preserving the ancient craft and enjoying the best breakfast you ever ate. I did come up with one very sophisticated gauge to accurately measure the goodness of this maple syrup. I took one taste and my tongue nearly slapped my brains out!