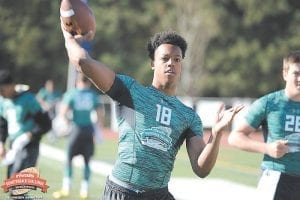 Georgia junior quarterback Jarren Williams appreciated the support he got from UK fans even when he decommitted from Kentucky. It’s one of the reasons the Wildcats are back in the driver’s seat for his services on the college football field.

Malik Monk is considered a lock to be a top 10 pick in the June NBA Draft, but that doesn’t mean everyone feels he is destined to be a NBA star.

Monk led the Southeastern Conference in scoring at Kentucky as a freshman and was among the nation’s elite scorers from 3-point range. Yet ESPN analysts Fran Fraschilla and Jeff Goodman both have some questions about his NBA future.

“I wish he was 6-5 and not 6-3 with an average swing span,” said Fraschilla. “I think Malik, once he settles into his NBA career, is going to be a scorer off the bench. I know he probably wouldn’t want to hear that, but he is a — he is still a volume shooter.

“He had the ultimate green light in high school. He had a green light at Kentucky. It actually hurt them at times. He can put the ball in the basket. There’s no doubt about it.

“But the fact that he’s undersized, with a below-average wingspan for the position, he is going to have to become what I call a technician. He is really going to have to work on NBA footwork, creating space and separation. It’s all there for him because when you draft these guys nowadays, for the most part, they’re NBA silly putty. You get to mold them with your coaching staff.”

Goodman said Monk’s consistency was the biggest question mark he had going into last season.

“I watched him a ton in AAU ball, and you’d see him go for 40 one game and then the next game come up with four points. He rarely did that this year,” Goodman said. “That’s what I think a lot of NBA scouts were really impressed with was consistent effort. He’s got to get better on the defensive end, but most kids do, unlike his back- court mate De’Aaron Fox who’s a terrific defender.

“But I think with Malik Monk, it’s not being a volume guy. You know, being able to handle picking your spots in the NBA a little bit because who knows where he’s going to go and how many shots he’s going to get.

“He had a long leash in a sense for Kentucky because they needed him to score the ball, so I think it’s going to be different for him, most likely, in the NBA, he’s not going to come in and get 20 shots every game. So I think for him, it’s just going to be consistency with his effort and with his production.”

Fraschilla says he still likes what Monk can do and bring to a NBA team in the right setting.

“His NBA future to me is a lead off the bench scorer,” Fraschilla said.

Georgia junior quarterback Jarren Williams and his family will remember the way UK fans reacted to his de-commitment on social media.

“I think my message to the fans would be that they have to put themselves in his situation. It’s not like he flipped. He de-committed and still said Kentucky was his No. 1 school,” Anthony Williams, the quarterback’s father, said. “That tells them something about the respect he has for the program.

“Kentucky fans have been good to Jarren. Even when de-committed, only a few fans were negative. They handled it with respect and dignity. I think Jarren remembers that. Give him an opportunity to work through the process. The relationship he built with Kentucky coaches, fans and players will go a long way for him. He still says Kentucky is No. 1, so I think Kentucky is still in the driver’s seat.”

What if the UK fan feedback on social media had been mainly negative?

“I can tell you if the fans probably went another way and a majority of the fan base said negative things, it would be difficult for him to go back (to UK),” Anthony Williams said. “The way they responded to him with things like, ‘We support you and make your best decision and hope you will be back’ and all the encouraging things he heard from Kentucky fans made a big difference to him.”

. Rivals.com basketball recruiting writer Krysten Peek (@KP_ Rivals on Twitter) was like most national analysts when she thought Kevin Knox would commit to either Duke or North Carolina. She was not expecting him to pick Kentucky like he did.

“Knox always stayed a little quiet on his recruitment, so I don’t think anyone was a 100 percent sure where he would be ending up,” Peek admitted.

“I know Kevin has played with the other Kentucky commits for awhile now whether that’s for Team USA, all-star games or camps during the AAU season last summer. He’s not as outgoing as Quade, Jarred or P.J. but he can shoot and runs the floor well. I know they’ll all like playing with him and made that clear to him,” Peek said.

She says there is no one thing she likes best about Knox. Instead, it’s all that he can do that impresses her the most.

“The way Knox runs in transition is impressive. He has the size to finish at the rim but also can knock down the corner 3 with ease,” she said. “He’s a hard worker and I think he’ll fit in well with coach Cal’s offense.”

Isaac Humphries would like to play in the NBA just like former UK teammates De’Aaron Fox, Malik Monk and Bam Adebayo will be next year.

For Humphries, though, that’s not a given and many were still surprised that he decided to leave UK after his sophomore season to pursue a professional career. But for him, playing professionally back home in Australia is a viable option.

“It’s an up-and-coming league in the world. There’s good opportunities for Australian college players to go home and play,” Humphries said. “Knowing that our league is getting better is a bonus as well. I’m going to explore the NBA and any other option that I have.”

The 7-0 Humphries played sparingly during his two years at UK but turned heads with 12 points and five rebounds in 21 minutes against North Carolina in his final game.

He could play in Europe because he’s more than used to being a long way from home after spending the last four years in the United States and seldom seeing his family. He said UK fans welcomed him in a way that made being away from his home in Sydney a lot easier.

He also appreciates what coach John Calipari did for him, including his decision to leave UK early.

“He made it clear any decision I made was okay with him and he would be happy for me,” Humphries said. “He was nothing but positive and helpful the whole time I was at Kentucky and still is doing all he can for me.”

Kentucky junior offensive lineman Nick Haynes recently graduated from UK and will now have a fifth year of education while playing for the Cats next season.

No one was happier than his mother, DeDe Haynes.

“This is what we came to Kentucky to do,” DeDe Haynes said. “My son just starting playing football two years prior to coming to college. Basketball was what was in his heart, but he has come to love football and Kentucky.

“When he got a chance to play SEC football, oh my gosh, it was huge. Even with all that, academia is what Nicholas has always loved. From the very beginning, our conversations were always about academics first. I think is what a student-athlete should be.”

Credit his parents for that.

“In our house, grades were first or you would sit on the bench. You would not get on the field or court. He never had to sit out, but his older brother had to. I always told them if you give me a half effort in school, then I would have him pick which half he played in basketball. Nicholas paid attention to that.”

Nick Haynes was a double major in economics and business. He has various business contacts in both fields and could pursue a job now, but wants to stay at UK for another year of education as well as be part of what he thinks will be another successful season.

What Kentucky baseball has done this season under coach Nick Mingione this season has been nothing short of remarkable. After a weekend sweep of Tennessee, UK was 36-16 overall and 18-9 in SEC play.

If UK can win two of three games at Florida — a big if considering how talented the Gators are — it would claim a share of the SEC East title and maybe the overall league title.

Kentucky had 48 hits in the three wins over Tennessee, including nine for Riley Mahan. He had three home runs.

However, what impressed me the most was how Mingione handled Senior Day. He had the mothers of each UK senior throw a ceremonial first pitch to her son. It was a small, but touching, gesture and just another reason players seem to like Mingione so well.

Quote of the Week 2: “With him being 17 and only been playing basketball full-time for 1-1/2 years, when you say the sky is the limit for him, it can get scary with how good he could be,” Kevin Knox Sr. on his son, recent UK commit Kevin Knox II.

Quote of the Week 3: “He could come back, but is he going to be in any better position to get started with his (professional) career? I didn’t believe so and neither did he,” John Calipari on Isaiah Briscoe keeping his name in the NBA draft.