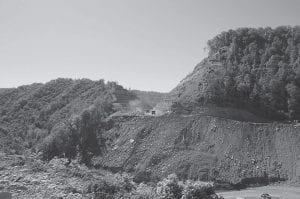 Crews are cutting through the tops of the mountains as the new U.S. 460 moves closer to completion through Pike County. Construction is scheduled for completion in six years. (AP Photo/News-Express, Emily Burton)

Construction of an improved U.S. 460 through the rugged mountains of Pike County is under way and is scheduled for completion in six years.

The mammoth $600 million project will create a four-lane highway from Pikeville through Elkhorn City to join with a planned new highway in the mountains of southwestern Virginia.

Sara George, a spokeswoman for the Kentucky Transportation

Cabinet in Pikeville, told the Appalachian

News-Express that the project, which began in 2003, could be one of the costliest ever in Kentucky by the time it’s completed in 2015. Cutting roadbeds into the sides of mountains and building huge bridges to span streams and valleys have pushed the cost of construction to $30 million a mile.

George said portions of the highway along the Kentucky mountaintops will offer spectacular views of central Appalachia while providing a much safer route than the winding Kentucky 80 that it replaces. The new road will be a limited-access highway with four lanes separated by a median.

Construction now is under way on portions of the road near Stagger Fork, Greasy Creek, Snake Branch, Wolfpit Branch and Beaver Bottom.

The project is part of a broad federal Appalachian roadbuilding plan. The Appalachian Regional Commission, which is funding the project, wants to open the mountain region to commerce by improving the transportation system.

George said once the new U.S. 460 is completed, it not only will provide local residents a means to better travel the area, but it also will provide tourists with easier access to hard-to-reach destinations like the Breaks Interstate Park, a remote location known as the “Grand Canyon of the South” on the Kentucky-Virginia border.

The highway project also will create hundreds of acres of flat land, which will be available for residential and commercial development after construction is completed, George said.

The project manager, Michael Johnson, said there will be four intersections on the roadway: One, at the Breaks, will create a new entrance to the park; one at Marrowbone, a third at Wolfpit, and a fourth where the roadway will begin in Pike County, at an intersection with U.S. 23.