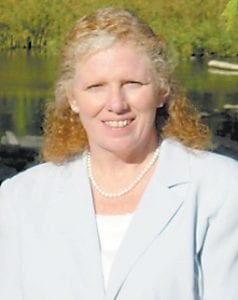 Gwendolyn H. Whitaker was a mother of four and a nurse working with a research project based in downtown Whitesburg.

A 25-year-old Whitesburg man is charged with murder and assault in connection with a Sunday night car crash which killed a mother of four and injured her husband.

Jonathan A. Anderson, of 864 Solomon Road, is being held in the Letcher County Jail without bond in connection with the death of Gwendolyn H. Whitaker, 48, of Roxana.

Mrs. Whitaker died Monday of injuries she received when Anderson crashed his Ford F-150 pickup into the rear of her vehicle while both were traveling north on the Whitesburg bypass at 7:19 p.m. Sunday.

Police say the wreck occurred when Anderson was trying to pass another northbound vehicle and was unable to stop his truck when he came upon the Toyota Avalon passenger car in which Mrs. Whitaker was following her husband, Mitchum Whitaker, to the Letcher County Extension Office, which is located on a hill above the bypass.

The impact caused Mrs. Whitaker’s car to crash into the rear of the Buick passenger car her husband was driving. Mr. Whitaker, 49, is maintenance supervisor at the extension office. The couple were delivering a vehicle to the office’s parking lot for later use by their son, who was returning home from a 4-H goat show being held out of town.

Mrs. Whitaker had to be cut from her vehicle before she could be airlifted to Holston Valley Medical Center in Kingsport, Tenn., for treatment. She was pronounced dead at 11:11 a.m. on Monday.

According to court documents, Anderson ran from the scene and was later found hiding in weeds.

Anderson was originally charged with driving under the influence of alcohol or drugs, to which he pleaded not guilty during an arraignment in Letcher District Court Monday afternoon.

KSP Trooper Brandon Thomas, who is in charge of the investigation, filed additional charges of murder and second-degree assault against Anderson. He is also charged with no registration plates, no registration receipt, failure to produce an insurance card, failure of non-owner operator to maintain required insurance, leaving the scene of an accident, failure to render aid or assistance, and failure to wear a seat belt.

A preliminary hearing for Anderson is set for Dec. 1 at 10 a.m.

Letcher Funeral Home is in charge of funeral arrangements for Mrs. Whitaker, details of which were not available at press time.

Mrs. Whitaker was a nurse who for the last two years worked as a project manager for Faith Moves Mountain, a University of Kentucky research project headquartered in downtown Whitesburg. She worked with community churches to try to break barriers that most often keep people from getting screenings for colon, breast or cervical cancer.

“She was wonderful with people,” said Nell Fields, a project manager with Faith Moves Mountains. “She was wholeheartedly committed with trying to get people screened.”

Fields said Mrs. Whitaker was passionate about cancer prevention and would go out of her way to make sure that those most at risk would get the help they needed.

“This worksite will never be the same,” Fields said, adding that Mrs. Whitaker had a way of saying what she was feeling and meaning what she was saying with a pure heart.

“She was a very direct person,” said Fields. “She was a good Christian woman.

Katie Dollarhide, who worked with Mrs. Whitaker at Faith Moves Mountains, said she was a “wonderful family person, a great community person, and a great coworker and friend.”