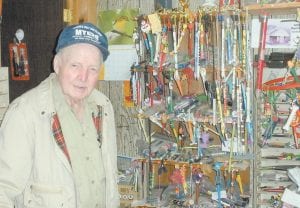 Rev. James ‘Preacher’ Johnson, 87, of Cumberland, has been collecting ink pens for 15 years and has more than 7,000 in his collection. The Letcher County native has a goal of collecting 10,000 ink pens.

Do you have an ink pen that you don’t mind parting with? An 87-year-old Letcher County native would like to have that pen to complete his collection.

The Rev. James ‘Preacher’ Johnson, who resides in Cumberland, has more than 7,000 ink pens and wants to fulfill his longtime goal of having 10,000 pens.

“He has pens from as far away as Bombay, India, Germany, Italy, Russia, and Egypt,” said Kim Smith, Johnson’s daughter who lives in Maynardville, Tenn. “His pens range from a little red hot chili pepper to a jeweled pen from India. He doesn’t care if they write, he wants them to have a logo of some kind on them or just be cute or unusual.”

Lots of family, friends and strangers have contributed to his pen collection, which he started about 15 years ago.

“He said that one day he was in town and a lady he did not know stopped him, rolled down her window and handed him a bunch of pens and then drove off ,” said Smith.

Johnson no longer drives and isn’t able to find pens to add to his collection.

“He is starting to forget people and places, but he still loves his pen collection and shows it off to everyone who visits his house,” said Smith. “The pens don’t have to be anything fancy. He is so tickled that people are being so thoughtful to him.”

Johnson’s sister, Eliza Jane Madden, and her husband, Ford, live in Isom. Johnson is a son of the late William and Bithie Johnson, also of Isom.

Johnson is a Pentecostal minister, a World War II Army veteran, and a retired coal miner who worked 34 years for Blue Diamond Coal Co. in Letcher County. He has been married for 64 years to Juanita and is the father of eight children. He has many grandchildren and great- grandchildren.

“He has a reputation as a kind and humble man that would literally give you the shirt off of his back,” said Smith.

Smith said her father enjoys telling stories about when he joined the Army in 1941 when he was 19 years old.

“He said that on Dec. 7, 1941 he had just finished training and was at a base at Angels Island near San Francisco,” said Smith. “He was standing in a line getting ready to turn in his blanket because they were going to board a ship to go to the Philippines when his commanding officer got on the loudspeaker and said, ‘Fall out and make your beds back up. The Japanese just bombed Pearl Harbor.’”

Johnson shipped out from Angels Island on Dec. 26, 1941 headed to Hawaii.

“He said that he watched the Golden Gate Bridge go out of sight and he was already seasick,” said Smith. “There were 32 ships in his convoy and it took 13 days to get to Hawaii.”

Smith said Johnson enjoys telling people how much the Army paid him in 1941. “He says that he was paid $21 per month with $6 more for hazard pay if you went overseas,” said Smith. “Then, the army took back $2 per month for laundry. Cigarettes were 18 cents for a pack of Camels.”

Smith said Johnson is a man that has worked hard to feed his family, serve his country and serve his Lord as a minister.

“Preacher Johnson is a sweet man you will never forget if you ever get the chance to meet him,” said Smith.