Hearing set this week for two held in death of Gibson, 44 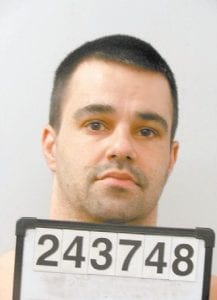 A man charged with the April 28 murder of Ricky Allen Gibson, 44, was on supervised release after a felony conviction in 2015, court records show, and was due to be released from supervision in just three weeks.

It was the latest in a long line of convictions for Clifford Jermaine Caudill, as he went in and out of jail, receiving mostly suspended sentences for crimes ranging from public intoxication to assault and threatening to blow up a phone company office.

Caudill, 38, of Neon, and Dedra Keathley, 41, of Joes Creek in Pike County, were charged late on May 2 with murdering Gibson and with tampering with evidence for allegedly dumping the body on Haymond Hill.

Police are still looking for two other subjects in connection with the murder. One, a brother of Caudill, is wanted for violating probation. A revocation hearing is set for today (Wednesday). Caudill and Keathley will have their first hearing on Thurs- day in Letcher Circuit Court.

A partially decomposed body identified as Gibson’s was found on a strip mine at the top of Haymond Hill off KY 805 about 10:30 a.m., May 3. 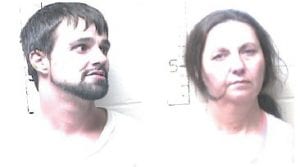 MAN AND WOMAN CHARGED IN MURDER – Dedra Keathley and Clifford Caudill are charged with murder and tampering with physical evidence in the death of 44-year-old Ricky Allen Gibson at Neon. Caudill, pictured in a prison mug shot, has a long history of convictions and suspended sentences.

Police believe a third man, who they have not publicly named, assisted in disposing of the body. In addition to that man, they are also looking for Caudill’s brother, Braden Uriah Stamper, for absconding probation. Authorities said Stamper lived in the same house as Caudill, and has not been seen since the murder, and did not report to his probation officer for his scheduled last visit.

“He had gone in there that day, and was upset his telephone had been cut off, and it wasn’t even in his name,” Whitesburg Police Chief Tyrone Fields said. He said when store refused to help because the phone wasn’t in his name, Caudill threatened to bomb the store, and made other threats.

“When I got up there, he was over in A-Plus Rental, and he admitted he was mad and threatened them,” Fields said.

When he arrested Caudill, Fields said, he found a homemade “shank,” or prison knife, in his pocket.

Fields said he didn’t know what happened to the case, because he was never called to go to court for it.

In June 2016, six years after being charged with the possession and assault charges, Caudill was sentenced for those crimes. He received five years of supervised probation, but because of time served and state sentencing formulas, he would have served out his probation in less than 35 months.

A month after his sentence to probation, Special Letcher Circuit Judge Eddie Coleman sentenced him to 90 days on one charge and one year on another from the March 2016 charges. Despite being on probation when the sentence was handed down, he was out of jail and is now charged with murder.

Detectives and troopers with the Kentucky State Police had been investigating the Gibson case as a missing person for several days, but arrested Caudill and Keathley overnight last Wednesday after Caudill, during questioning that night at the Hazard State Police Post, said that Gibson had been killed and his body disposed of, police said.

According to police, Caudill told them that an altercation occurred inside the bathroom at his home at 27 Welch Hollow with Gibson and two other people. The citation says that during the altercation, Gibson was shot and killed. Caudill and the other two people transported his body to the strip mine at Haymond Hill to hide it, police said.

Another citation says that Keathley was uncooperative and denied any involvement.

A third person is also believed to be involved in disposal of the body, which had been on the mine site for several days. It was sent to Frankfort for autopsy. Letcher County Coroner Renee Campbell said Tuesday that results of the autopsy had not been returned.

Police have not said who they believe killed Gibson.