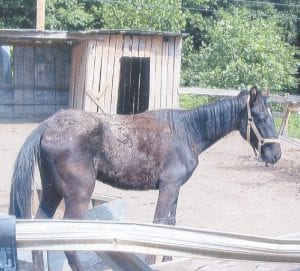 Pictured here is one of four horses removed from private property at Company Branch on Craft’s Colly June 15 because authorities say the horses were so badly underfed their hip bones and ribs could be seen. No food or water was available for the horses in the lot where they were being kept, a criminal citation says.

An Ermine man was charged with cruelty to animals last week after four horses authorities described as malnourished were removed from his property.

Dennis L. Dollarhide, 23, of 472 Company Branch, is charged with second-degree cruelty to animals in a citation issued June 15 by the Letcher County Sheriff’s Department. Dollarhide is scheduled to answer the charge in Letcher District Court on June 29.

According to the citation, the horses were so badly underfed their hip bones and ribs could be seen. No food or water was available for the horses in the lot where they were being kept, the citation says.

“We were getting numerous complaints that the horses weren’t getting anything,” said Sheriff Danny Webb.

The complaint against Dollarhide was received through the animal control office of the Letcher Fiscal Court.

Judge/Executive Jim Ward, who accompanied Webb to the scene, said the horses were being housed in a small shelter in very bad conditions.

“One horse was wobbling it was so weak,” said Ward.

Dana Outlaw, president of the newly-established Pawz and Clawz Humane Society in Letcher County, said the horses were in terrible shape.

“Their ribs were sticking through. They were dirty. They were thin, extremely thin. You could tell they hadn’t been fed well for a long time,” said Outlaw. “Where they had never been groomed or brushed, their hair was coming out in spots.”

Webb said he has been on several animal cruelty complaints in the past, but this complaint was different.

“This is the first time it looked like the horses needed extra care and saving,” said Webb.

Webb said there isn’t a day that goes by that his office doesn’t answer complaints concerning animals.

“We have a terrible problem here in Letcher County with the number of dogs and cats running lose,” said Webb. “If people are going to have animals, they need to take care of them.”