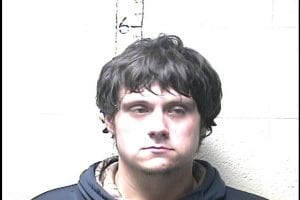 An Isom man has been arrested for allegedly supplying methamphetamines to a Letcher Middle School student to sell at school.

Five students were involved in using the methamphetamines and one was sent to the hospital by ambulance on Tuesday, Superintendent Denise Yonts said. All were students at the Letcher Middle School.

Bobby W. Heiston, 21, of Little Colley, is charged with first-degree trafficking in a controlled substance, first offense. He is in the Letcher County Jail.

The Letcher County Sheriff’s Department arrested Heiston on two felony warrants and new drug charges Thursday evening. The charges related to the school were filed at 11:21 a.m. today. Heiston had a 2018 indictment warrant for complicity to second-degree burglary and a warrant for probation violation related to a 2016 police chase. He was also charged Thursday with possession of a controlled substance (meth) and possession of drug paraphernalia, after a deputy allegedly found meth inside a flashlight in the door pocket of his car, and a pipe used to smoke drugs.

“My understanding from our investigation is he had given the child meth to take to school with the intention of selling it,” Sheriff Mickey Stines said. “He couldn’t sell it, so he ended up giving it away.”

Stines said the investigation showed the drugs were probably given to the child on Saturday, and that student then took the drugs to school Monday morning.

“We have video evidence of this happening, so we know the kids that did it,” Stines said. “The evidence shows they snorted it.”

A message sent to parents from the school on Wednesday said some students had “ingested a drug,” and that the school had contacted the sheriff’s department to investigate, but did not specify what drug they had taken, or how it was administered.

Yonts on Thursday confirmed that it was methamphetamines. She said this is the first time she is aware of that happening in any of the schools here.

“We’ve had other drug issues in the past, but not meth,” Yonts said.

She said the incident was brought to the principal’s attention on Monday evening, and the school district contacted the sheriff’s department.

“As soon as we were notified, I had my school resource officer open an investigation,” Stines said. “There was no delay in the investigation.”

Parents concerned about the lack of information about the incident and the about the fact that meth was used in the school have taken to social media saying they planned to keep children at home because of the incident. Yonts said attendance was down on Thursday, but declined to say by how much. She defended the schools response, saying there was no meth lab, and there was no issue of contamination at the school. The school has been cleaned as a precaution, Yonts said, and information was sent to parents as soon as possible.

Stines said he sent extra security to the school after the incident, and the school has been thoroughly searched. He said he is sure the school is safe or he would have recommended it be shut down.

“We want to parents to know we’re 100 percent here for their children’s safety,” he said.

Stines would not say directly whether the meth recovered was homemade “shake and bake” meth, or laboratory produced meth that is being imported into the county, however he said because of the cost of the more highly concentrated “ice,” there are few home meth labs left in the county.

More From Go To The Section