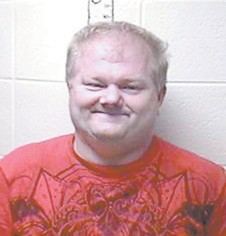 Jimmy Dean Branson, 41, is on home incarceration after being released from the Letcher County Jail.

Police say a Colson man moved a corpse from his home on July 4 in an attempt to stay out of legal trouble.

Jimmy Dean Branson, 41, of 217 Buck Creek, was arrested October 15 and charged with tampering with physical evidence.

Letcher County Sheriff Danny Webb said Patsy Cook was found dead in a bed of an apparent drug overdose around 10 a.m. on July 4 in Branson’s house near Colson. Branson, with the help of other people, wrapped Cook in a blanket and transported the body to the home of Cook’s sister, Cheryl Fields, at Ran Day Hollow in Big Cowan.

“She died of suspicious causes and they moved the crime scene,” said Webb., adding that authorities were called approximately two hours after the body was discovered.

Kentucky State Police and Letcher County Coroner Marty Baker were called to the scene after Fields called 9-1-1 at 1:23 p.m. on July 4. State police continue to investigate the cause of death of Cook’s death. Webb is investigating the removal of the body.

The case against Branson will be presented to the Letcher County Grand Jury on October 18. Other arrests are pending.

Branson was released from the Letcher County Jail on Tuesday after qualifying for electronic monitoring on home incarceration.