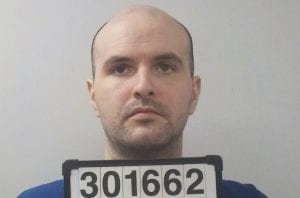 One of two men convicted in the stabbing death of Michael Hogg in downtown Whitesburg on New Year’s morning 2014 has filed a motion seeking shock probation.

Smith now says he deserves shock probation based on what he says was his role in the conviction of a cop killer. Smith claims that he overheard a conversation in the jail and alerted deputy jailers who were able to collect evidence against a man who killed a police officer.

Smith had filed an application for parole, but it was denied in January. His next eligibility for parole is Dec. 1, 2020.

Special Letcher Circuit Judge Kent Hendrickson has not yet set a date to hear the motion.

Smith was accused along with James R. Huffman IV of stabbing Hogg to death on Hayes Street in Whitesburg, wounding Stacy Phillips and Christopher Puckett, and cutting the tires of Hogg’s Jeep and attempting to break out the windows, preventing Samantha Mullins from driving Hogg to the hospital. Both had faced complicity to murder and complicity to attempted murder charges, as well as charges of criminal mischief for damage to the Jeep. Smith was also accused of cleaning the blood from the knives used in the killing, and hiding them in his boot. Huffman was convicted of the stabbings in December 2017.

Smith is currently imprisoned in Roederer Correctional Complex in Lagrange, about 20 miles from Louisville.