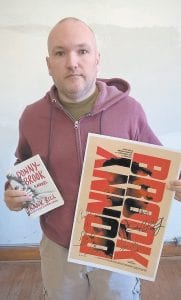 STUNTMAN – Charles Henry Hicks of Letcher County displays a movie poster from Donnybrook and the book on which the motion picture is based. Hicks worked as a stuntman for the large fight scene in the movie, which was filmed in northern Kentucky. (Photo by Sam Adams)

Charles Henry Hicks got into a fight in 2017. A movie fight, that is.

Now the Bottom Fork native is seeing the results on the big screen, and is waiting for a second movie in which he was a stunt man and extra to be released.

“Donnybrook,” a feature film about an ex-Marine (Jamie Bell) who trains for an illegal bare-knuckle cage brawl with a $100,000 purse, premiered February 15 in theaters and February 22 on streaming video.

Hicks, 43, who now lives at Jeremiah, spent 20 years working at Johnson Controls in Georgetown, making car seats until four years ago, then moved back to Letcher County fulltime last year. Just before he did, he decided on a whim to attend a casting call for “Donnybrook.”

“Frank Bill, the author of the book “Donnybrook,” used to travel down here from Indiana to take martial arts classes with Frank Sexton, under John Ng,” said Hicks, who teaches martial arts two days a week. “(Bill) contacted Frank and said if he knew any fighters, to tell them to come up to Cincinnati for tryouts.”

Hicks went, and was picked to play one of the fighters in the cage match — or as it’s called in the film, the “Donnybrook.” The movie was filmed in northern Kentucky.

Though it’s a small role with no lines, Hicks said it was fun to do. He said he was amazed to see how fast Jamie Bell picked up what the stunt coordinators told him to do, and how Frank Grillo, who plays the villain in the movie, performed.

“It’s a lot of work, but it’s a really neat process to see how the actors work,” he said.

A stunt company from Atlanta worked with the fighters, and Hicks said they told him that even at 43, he could still make a living doing stunts, though he said he feels it’s “a little late in the game” to do many stunts other than fights.

“Nothing but good things have come out of this,” he said.

After finishing work on “Donnybrook,” the casting company specifically called for stuntmen and extras from “Donnybrook” to come back for another movie called London Calling that filmed in Olive Hill. Hicks plays the role of an oil worker in that movie, again as an extra and stuntman. London Calling stars Levin Rambin, Ron Perlman, Malcolm McDowell, Joelle Carter, Vinnie Jones and Bruce McGill, all of whom Hicks said he got to meet during filming.

Hicks said he doesn’t see movies as a career, but as something he’ll do “from time to time.” He also auditioned the first day for “The Evening Hour,” which filmed in Harlan, but didn’t go back because his wife was pregnant and the filming schedule would have kept him away too much.

Since he found his niche in a couple of films, he also nudged his sister, Jessie Hicks, in that direction. A gymnast, Jessie Hicks recently completed her first stunt role for a movie currently filming in Cincinnati.