By MARILYNN MARCHIONE The Associated Press 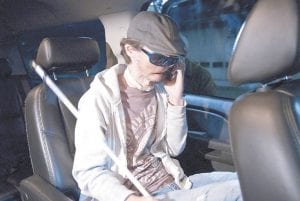 In this photo provided by Brigham and Women’s Hospital, Dallas Wiens talked on his cell phone while en route for a full face transplant in Boston. (AP Photo)

A Texas construction worker horribly disfigured in a power line accident has undergone the nation’s first full face transplant in hopes of smiling again and feeling kisses from his 3-year-old daughter.

Dallas Wiens, 25, received a new nose, lips, skin, muscle and nerves from an unidentified dead person in an operation paid for by the U.S. military, which wants to use what is learned to help soldiers with severe facial wounds.

Wiens will not resemble “either what he used to be or the donor,” but something in between, said plastic surgeon Dr. Bohdan Pomahac). “The tissues are really molded on a new person.”

Pomahac led a team of more than 30 doctors, nurses and other staff at Brigham and Women’s Hospital during the 15-hour operation last week. Wiens was listed in good condition at the Boston hospital on Monday. He did not appear at a news conference with the surgeon.

The Fort Worth man’s features were all but burned away and he was left blind after hitting a power line while painting a church in November 2008. The transplant was not able to restore his sight, and some nerves were so badly damaged from his injury that he will probably have only partial sensation on his left cheek and left forehead, the surgeon said.

“When I saw Dallas for the first time I was worried that there may not be much we could do,” said Pomahac, ( pronounced POE- muhhawk).

Wiens ( pronounced WEENS) has been able to talk to his family on the phone, said his grandfather, Del Peterson, who attended the news conference Monday.

In an Associated Press story and a YouTube video last fall, Wiens spoke poignantly about why he wanted a transplant and how he wanted to smile again and feel kisses from his daughter, Scarlette, who turns 4 next month. Face transplants give horribly disfigured people hope of an option other than “looking in the mirror and hating what they see,” he said.

He told the AP that his daughter and his faith have kept him motivated.

“She says, ‘Daddy has a boo boo, but God and the doctors are making Daddy’s boo boo all better,’” Wiens said. “She doesn’t care and she never has since day one that I was disfigured.”

No details about the donor were disclosed. The hospital said the match was based on gender, race, age and blood type.

Peterson said his grandson hopes to become an advocate for facial donations, and he thanked the donor family, saying, “You will forever remain in our hearts and our prayers and we are grateful for your selflessness.”

The surgery was paid for by the Defense Department, which gave the hospital a $3.4 million research grant for five transplants.

The new federal health care law also helped Wiens by allowing him to get insurance coverage under his father’s plan for the expensive drugs he will have to take for the rest of his life to prevent rejection of his new face. He will be covered until he turns 26 in May. He expects to be eligible soon under Medicare, which insures the disabled as well as those over 65.

Wiens had no insurance when he was injured; Medicaid covered about two dozen operations in Dallas until his disability payments put him over the income limit.

About a dozen face transplants have been done worldwide, in the U. S., France, Spain and China. This was the third in the U.S. and the second at the Boston hospital. The previous one was in April 2009 — the partial replacement of the face of a man who was injured in a freak accident. In 2008, Connie Culp became the nation’s first partialáface transplant recipient. She underwent surgery at the Cleveland Clinic.

Pomahac said one of the two people on the waiting list in Boston for a face transplant is Charla Nash, the Connecticut woman who was mauled and blinded by a friend’s 200-pound chimpanzee. The animal ripped off Nash’s hands, nose, lips and eyelids. She is also waiting for a hands transplant.

The world’s first face transplant, also a partial, was done in France in 2005 on a woman mauled by her dog. Doctors in Spain performed the first full face transplant last March for a farmer who was unable to breathe or eat on his own after accidentally shooting himself in the face.