Man has been collecting coins about 74 years 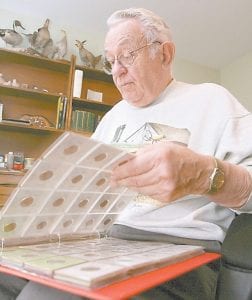 Charlie Fulker looks through a book of Lincoln pennies in his home in Bath, S.D. He collects old and new coins, cataloging the important ones. “This hobby — it’s a great time for an old guy,” said Fulker, 79. “It gives me something to do.” (AP Photo/Aberdeen American News, John Davis)

He’ll line up coins in little piles, examine all of the markings with his microscope and lights and polish them until they gleam. The Bath man collects old and new, cataloging the important ones.

Fulker has been collecting coins since he was a first-grader in 1936. That’s when a substitute teacher gave him pennies and nickels that he stuck in a jar.

Fulker isn’t alone in his hobby. South Dakota has a group, the South Dakota Coin and Stamp Association, that caters to the coin collector. Fulker is treasurer of the group, which was founded in 1951.

For Fulker, the hobby takes up some time. He can often be found in the office of his home, looking through his coins and arranging deals to buy or sell more. It’s not unusual for him to spend all day with his coins.

His oldest coin is a penny from 1804. But his favorites are his Jeff erson nickels or a 1955 double-day Lincoln cent.

“It takes your time up,” Fulker said. “It’s like a man who is drinking likes to drink. I like to look at coins.”

He used to collect national currency money as well, but he sold everything a few years ago and used the proceeds to build his house.

“I’ve collected a lot of things over the years — cars, guns, postcards,” Fulker said. “But this coin hobby has been the best thing I’ve ever done.”

The downfall is the expense and the experience needed. Dealers have to be careful because a lot of fakes are out there, he said.

But the benefits are vast, Fulker said. For one thing, it’s kept him young.

“I’ve made a lot of friends, and this has kept me going a little bit,” he said.

When Fulker goes to shows, he likes to encourage the younger generation to get into coin collecting by giving them a start. He’ll hand over a penny and answer any questions they have.

“We don’t have the young people we need,” he said.