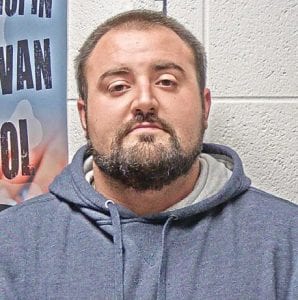 A Jenkins man has been charged with three felony counts after he allegedly shoved a woman in the Whitesburg Plaza parking lot, and then pointed a gun at her and her mother.

Johnny Preston Johnson, 27, of 268 Rocky Hollow in Jenkins, was arrested two days after the incident, which occurred October 23.

According to law enforcement, the incident began as an argument over a shopping cart in parking lot of Walmart and escalated from there. According to court documents, Johnson is accused of shoving Tonya Stallard to the ground, breaking her arm and dislocating her wrist, an injury which required surgery. She is also thought to have broken her tailbone in the fall onto the asphalt.

Sheriff Mickey Stines said several witnesses said Johnson then pulled a gun and pointed it at Stallard and at her mother, Deborah Stallard. One of the witnesses called 911, and District 2 Constable Austin Johnson, who is also working for the Whitesburg Police Department, responded to the scene and began an investigation. Two deputy sheriffs, Gavin Fleming and Seth Whitaker, arrived shortly thereafter.

Stines said there was a gun found and placed on the hood of a vehicle, and video appeared to show Johnny Johnson point the gun at the women.

Police at the scene did not arrest him, however, instead giving his gun back and telling all parties to go the county attorney the following day for warrants.

Stines said when the women sought warrants, County Attorney Jamie Hatton called him, told him the incident needed to be investigated and asked him to do it.

Stines said he interviewed eight witnesses that day, and viewed the security footage, then went back to Hatton, who issued the warrant.

Johnny Johnson was arrested at the Letcher County Sheriff ’s Department about 11:35 a.m., October 25, and was charged with two counts of first-degree wanton endangerment and one count of second-degree assault.