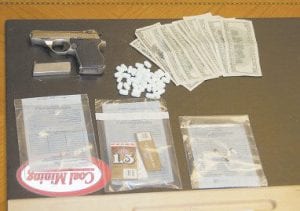 Police say they found hydrocodone and Xanax tablets, a stolen gun, cash, and marijuana when they raided the home of Raymond Smith Sr. at Premium.

A Premium man was arrested Monday evening after police said they found prescription narcotics, marijuana, cash and a stolen gun at his home.

Raymond E. Smith Sr., 57, of 3380 Highway 160, was arrested November 24 and charged with possession of marijuana, receiving stolen property, and possession of drug paraphernalia.

“It’s common to find stolen property during drug investigations,” said Damron. “They are commonly used for trade when someone doesn’t have enough money to purchase the drug of their choice.”

Damron said the sheriff’s department has been investigating Smith for suspected drug-related activity for several months.

“We have received complaints from the community of alleged trafficking of controlled substances by Mr. Smith,” said Damron who is in charge of the investigation. He said Smith’s case will be presented to the Letcher County Grand Jury.

Damron says he expects more arrests in connection with the investigation of Smith. He asked that anyone with information about drug trafficking in Letcher County call the sheriff’s department at 633-2293.