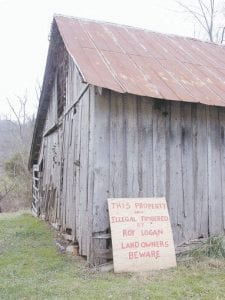 GOING PUBLIC – Roxana resident Mitchum Whitaker said he painted and erected this sign, which can be seen from KY Highway 588, because he has been unable to collect money owed to him for trees taken from his property.

A Letcher County man is trying to settle a timber dispute in the court of public opinion rather than in a court of law.

Mitchum Whitaker, of Roxana, has taken the unusual step of placing a sign on his property to bring attention to his not being paid for several large oak trees he says were taken from his property illegally.

“I’ve lost some pretty oak trees, some of them you couldn’t wrap your arms around,” said Whitaker. “It’s a sight to see it gone.”

Whitaker said he painted the sign, which accuses logger Roy Logan of taking the trees without permission, and placed it near KY 588 to warn neighbors and others passing by that their trees are in danger of being cut without their knowledge.

“All I’m expecting from this is to warn others,” he said. “Maybe someone else will be spared what has happened to me.”

Whitaker said his dispute with Logan began late last October, after Whitaker refused to allow a haul road to be built across his property.

“He asked me if he could use my property to bring off timber from a neighbor,” Whitaker said. “I told him there was no way.'”

Whitaker said the dispute escalated after he was told by a group of deer hunters that trees were missing from his land.

Whitaker said he walked to the top of the mountain behind his house and found that 12 large oak trees had been cut. He said he confronted Logan about the trees and was told they were taken by mistake.

“He said, ‘It was some fellows who work for me,'” said Whitaker.

Whitaker said he was told by friends in the logging business that the missing trees were worth as much as $4,000. He said Logan agreed to settle for $3,000, but has never paid any of the money.

Whitaker said that after waiting “for three or four weeks” on Logan to pay he reported the matter to law-enforcement officials but never heard back from them. He said Logan then approached him with an offer to cut the rest of the trees on his property that had any value.

“I said, ‘Are you serious? I can’t even get you to pay me for what you took from me already,'” said Whitaker.

Whitaker said the lines on his property are so well-defined that whoever cut the trees had to know they belonged to Whitaker.

“Some of those oak trees actually had the fence line running through them,” Whitaker said. “They cut some of the stumps four feet high so they could leave the fence there.”

Whitaker said the trees have a sentimental value that money can’t replace. He said one of the trees marked the mountaintop location where he would rest with past and present family members while squirrel hunting. Whitaker said he can still remember his grandfather showing him how to carve his initials into the tree – a ritual they repeated each time they went hunting, and one that he has since shared with his son.

“You think that tree wasn’t cut down?” he asked.

Whitaker said the incident marks the second time that timber has been taken from his property without his permission. He believes many of the problems associated with timber theft and timber trespass could be avoided if the Kentucky General Assembly would strengthen rules and regulations governing the timber industry.

Whitaker wants the state to create an office of “timber inspectors” whose jobs would be to check on each site where trees are being cut.

“We have mine inspectors,” Whitaker said, “why don’t we have timber inspectors?”

Whitaker also wants laws written to require buyers of logs to ensure that loggers obtained proper permission from a landowner before the trees were cut. Lumber companies should also be required to make sure property owners are being paid adequate royalties for their trees, he said.

Without such requirements, said Whitaker, the only way people can protect their trees is to “sit up there in your woods and watch it for 24 hours.”

Asked why he doesn’t go to court to settle the dispute, Whitaker answered, “It just seemed to be too much trouble to go through for $3,000.”