Man involved in chase is suspect in burglaries 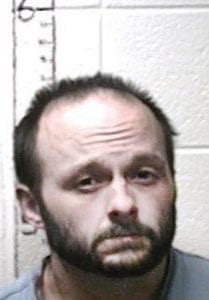 A Premium man suspected in a string of burglaries is one of two people arrested after he allegedly hit a Letcher County Sheriff ’s Department cruiser during a traffic stop and led police on a high speed pursuit on winding back roads near Isom.

The pursuit left at least one cruiser badly damaged, and the fugitive vehicle hung up on the edge of a bridge at Isom.

The incident began when Sgt. Alisha Congleton and Capt. Barry Engle stopped a white Chevrolet Cruze on KY 15 just south of Premium in an attempt to serve felony theft warrants on Joshua Ison, 36, of Premium, and Rose M. Newsome, 37, of PremiJOSHUA um. Ison was also a suspect in a string of recent burglaries including three in two days last week.

Sgt. Congleton of the sheriff ’s department said deputies were watching Ison’s house, and made a traffic stop on the vehicle when he pulled out of KY 160. Capt. Engle said he blocked the other entrance to the parking lot where the car stopped and he and Congleton got out of their cars with their weapons drawn. As Congleton was standing behind her car door, she said, Ison put his car in reverse and hit the push bar bumper on the front of her cruiser, knocking the door into Congleton. 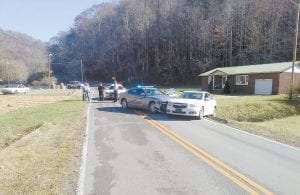 Suspect Joshua Ison, 36, was stopped near the mouth of Little Colley after his vehicle (right) was stopped by a Kentucky State Police cruiser. (Photo by Sam Adams

“It knocked the breath out of me, and about knocked me down,” Congleton said.

She said Ison then drove back onto KY 15, and turned up Smoot Creek, a one- to two-lane, winding road that connects to ice KY 1148 at Tilly on Little Colley.

Engle and Congleton called for assistance from Whitesburg Police Department and Kentucky State Police to block off roads leading out of the area, and a state police trooper coming from Isom encountered the vehicle on Little Colley.

KSP Trooper Donnie Kelly got behind the car and chased it at speeds of up to 100 miles an hour on Little Colley. Engle said the car turned into a field and started turning in circles. Kelley used his cruiser to ram the car twice in an effort to stop it before he was finally able to use a “pit maneuver” to knock the car off the road, where it hung up on the curb at the edge of a stone culvert near the intersection of KY 1148 and KY 15.

Engle said Ison ducked through the culvert, and deputies and troopers pursued him on foot into the creek, where they used a Taser to subdue him. Congleton tased Newsome as she approached the officers arresting Ison, Engle said. Ison and Newsome were transported to the Whitesburg Appalachian Regional Hospital by ambulance for minor head injuries received during the chase and the arrest. Both were lodged in the Letcher County Jail.

Ison was charged in the existing warrant with theft by unlawful taking for allegedly going into the Dry Fork Double Kwik and stealing a Samsung Galaxy cell phone, in addition to charges stemming from the chase. Newsome also had an outstanding warrant from Pike County for theft by deception.

Ison is charged with multiple felonies, misdemeanors and traffic offenses as a result of the chase, including first-degree and second-degree fleeing and evading, operating a motor vehicle under the influence of drugs, third-degree assault on a police officer, two counts of first-degree wanton endangerment of a police officer, receiving stolen property, and operating on a suspended license. Other charges are pending, Engle said.

Newsome is charged in the original warrant with theft by deception, and with multiple other charges related to the arrest Nov. 16, including receiving stolen property and resisting arrest.