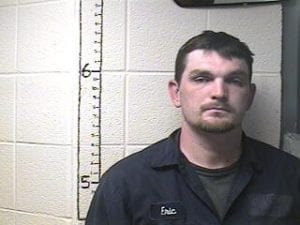 A Sandlick man involved in a fatal two-vehicle wreck on the Whitesburg bypass 13 days ago was arrested this afternoon and charged with driving under the influence.

Kelvin Eric Sexton, 30, was arrested at 3:08 p.m. and charged with operating a motor vehicle while under the influence of alcohol or drugs and possession of marijuana.

The sheriff’s department contacted Fields, who drove to Sandlick looking for Sexton. As Fields was stopped to pull off of KY 931 North onto business KY 15, Sexton was turning left from business KY 15 onto 931 North. Fields turned his cruiser around and followed Sexton.

“He was straddling the north- and southbound lanes,” said Fields.

Fields said he told Sexton about the complaint and asked if he could perform a sobriety test, which Fields said Sexton failed.

“He stated that he did snort pills and couldn’t take them by mouth,” said Fields.

Sexton was arrested and transported to the Whitesburg Appalachian Regional Hospital, where he underwent chemical testing. Test results are pending. Sexton remains in the Letcher County Jail.

Fields said Sexton told him he had just bought the Chevy Silverado yesterday.

On July 27, Sexton was involved in a fatal traffic accident on the Whitesburg bypass. Sexton was traveling north on KY 15 in a 2012 GMC pickup truck around 2:30 p.m. that Saturday when he collided with a 1993 Toyota pickup truck driven by Shawn Emerson Roark, 36. Kentucky State Police Det. Randy Combs said a side collision caused the Toyota to overturn.

Roark, a construction worker, was ejected from his truck and was pronounced dead at the scene by Letcher County Coroner Marty Baker. The cause of death is listed as head trauma.

A woman riding with Roark, Dorothy Hall Gibson of Premium, was also thrown from the pickup. She was airlifted to Holston Valley Medical Center in Kingsport, Tenn., in critical condition.

The July 27 wreck is still under investigation by state police and charges have not been filed.