Man is arrested after wielding sword outside Ermine business 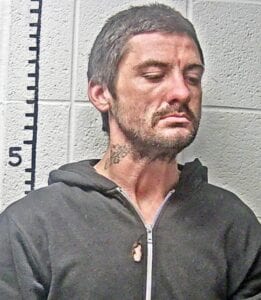 A Stinking Branch man was arrested on a public intoxication charge after he was reported swinging a sword outside a business at Ermine.

Deputy Sheriff Alexa Stambaugh and Letcher County Sheriff Mickey Stines answered a complaint about 9 a.m. Monday morning of a man swinging a large sword outside Aunt Bea’s Variety Store at Ermine. When they arrived, the man was already gone, but Stambaugh wrote in a citation that they located him on nearby Friday Branch.

She said the man admitted to using methamphetamine and had a needle, a Samurai sword and a large knife in his possession when she searched him.