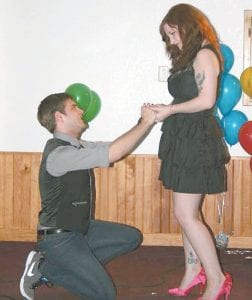 “Lean on Me,” the 1972 rhythm and blues smash hit by singer/songwriter Bill Withers, still has the power to unite men and women.

The latest example of the effect the ode to friendship can have on people came Saturday night in Whitesburg, when a Pikeville man proposed marriage to his girlfriend of five years after taking part in a karaoke rendition of the song.

Kenneth Zane, of Pikeville, proposed to Gina L. Bryant, also of Pikeville, during a “Kamikaze Karaoke” fund-raising event for the 11:11 for Life Letcher County Relay for Life team at the Whitesburg Shriners building.

Zane said he had planned on proposing marriage to Bryant in a few months anyway, but when he and team member Austin Black sang “Lean On Me” the moment seemed right to pop the question.

The 11:11 for Life team consists of team captain Bambi Pelham, of Jacksonville, N.C., and her friends and family from Letcher County and surrounding areas.