Man proves you can catch big fish at Fishpond Lake 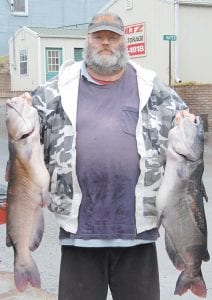 James Potter, of Dunham, was among those fishermen who hadn’t had much luck at Fishpond Lake recently. In fact, Potter said catches have been so poor of late that the number of fishermen at the Payne Gap lake has been on a major decline.

As word of Potter’s large catch Sunday night continues to circulate, the fishing action at Fishpond should see a significant increase.

Using chicken liver as bait, Potter reeled in his biggest catch in 25 years of fishing. It took him and Harold Stephens, a friend from Haymond, 15 to 20 minutes to land a blue channel catfish Potter hooked at Fishpond Lake. The fish weighed in at 21 pounds, nine ounces, and measured 34 inches long. Potter said its girth was two feet.

“I just want to show people it isn’t dead up there,” said Potter. “It proves there are still some good catfish to catch.”

Although Potter encourages others to fish at Fishpond Lake, he won’t reveal the exact location where he hooked the big fish.