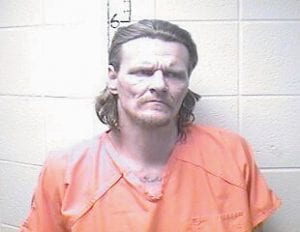 A Thornton man who was pinned under a car while trying to steal its catalytic converter last November is back in trouble again — for allegedly stealing more car parts.

Police say Paul Hall has admitted to stealing four tires and rims from a Ford Mustang in the Cram Creek community of Mayking earlier this month.

“This trooper was dispatched to 206 Great Oak Drive in reference to parts stolen from a vehicle,” Kentucky State Police Trooper Samuel Pease writes in a an arrest citation filed in the case. “I arrived on scene at approximately (4:59 p.m.) and spoke with victim Michael Baker, who stated between the hours of 10 p.m. on July 9 and (1 a.m.) on July 10 someone had stolen all four wheels and tires of his vehicle. I then took pictures of Baker’s vehicle and got a description of the stolen property.”

On the morning of last November 27, employees arrived at work at Edge of Town Motors in Neon to find Hall pinned under a car that apparently fell on him the night before, which was Thanksgiving evening. He was arrested on theft charges in connection with that case after being released from Pikeville Medical Center.

Hall told police at the time that he had recently lost his job and needed money, according to Jenkins Police Chief Jim Stephens said.