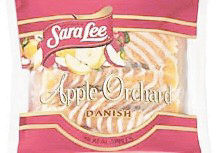 A Millstone man said his Danish like the one pictured here was “adulterated” with rubber bands.

Finding rubber bands in your mouth can be life changing to someone who isn’t wearing braces on his teeth. So says one Letcher County man.

In a lawsuit filed recently in Letcher Circuit Court, Ben Bentley of Millstone charges that he suffered damages “not to exceed $75,000” when rubber bands found their way into his mouth through a mass-marketed Danish pastry.

The suit says that after Bentley purchased an “Apple Orchard Danish” on February 21 he “consumed a substantial portion of (the) product before determining that the product was adulterated with rubber bands.”

The suit adds that Bentley “consumed portions of the rubber bands.”

The suit names Wisconsinbased Sara Lee Foodservice as defendant in the case, and charges the company with violating Kentucky’s consumer protection laws.

Sara Lee was “negligent in (its) manufacturing process and allowed tainted products to be produced and sold to (Bentley),” the suit says, “thereby causing damage to (Bentley), who is entitled to recover for all of his damages and injuries sustained.”

The suit doesn’t mention the location where Bentley bought the Danish.

According to Sara Lee’s web site, the Apple Orchard Danish is individually wrapped in 3.25- ounce portions and sold in a 12- count case. The company says the Danish is “made with real pieces of apples and covered in a sweet white icing for great taste and appearance.”