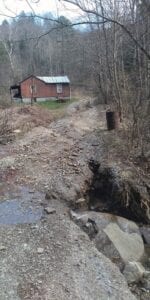 Daniel Stewart has used logs to try to make this road at Cram Creek, Mayking, passable for his Ford F-250 pickup. Letcher County Judge/Executive Terry Adams agrees the road is in terrible shape, but said it would be illegal for the county to work on it under the current circumstances. Stewart disagrees. (Photo by Sam Adams)

From the 1700’s through the Civil War and even World War II, “corduroy”roads were made from logs laid down in the mud.

In the 21st Century, a Cram Creek man has had to resort to a similar technique.

“I’ve got a big Ford F-250, four-wheel drive, and I got it stuck down there,” Daniel Stewart said.

His solution: Shove a foot-thick log into the gully that runs between two tracks on the road. He’s asked the county for help, but so far, nothing has budged except for the mud washing down the road during hard rains.

The road used to be pretty good, Stewart said, but that was more than a year ago. His wife, Sandra, 57, had a heart attack during the winter and had to be taken to Pikeville Medical Center. While she was there, one of those hard rains came, and the road went.

“While we were gone, that flood came in February and we had to walk back up the hollow,” Stewart said.

Things have only gotten worse.

The road, for now still known as a driveway, is not named because it’s not in the county road system. County Judge/Executive Terry Adams agreed the road is bad, but says it’s illegal to work on it. Stewart says the judge isn’t trying hard enough. While Stewart’s is the only house on the road, the cemetery behind it, he said, is public.

Adams agrees, but says there’s more to it than just that.

“He wanted the road worked, and because of there being a public cemetery there, we could adopt it in and work it up to the cemetery,” the judge said. “We posted it and advertised it, and did everything we needed to do, and some of the rest of the family came up there and tore the signs down we posted and said they didn’t want it adopted.”

Stewart, however, said someone else owns the road to the gate, and the county could at least take care of it to there without the family member being involved.

It was not clear whether the ownership of the road has been investigated by the county, but Stewart says it’s owned by a neighbor who is agreeable to having it worked. But until he can prove the ownership or until the county looks into it on its own, it’s likely Stewart will continue to be stuck at the end of a corduroy road, and stuck in his assessment that “Terry won’t do nothing.”

For his part, Adams said he would if he could.

“It was bad. I’ve been all the way up to the cemetery,” Adams said. “It’s bad, and I want to help people in that situation, but at the same time, it’s got to be legal, too.”