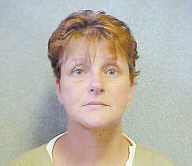 NOW IN PRISON – Mitzie Johnson, left, and Susan Moore are in the Kentucky Correctional Institute for Women in Peewee Valley, where they are serving sentences for their role in the crucifixion and murder of Michael Ray Slone, who died in June 2003.

A Floyd County man has been formally sentenced in Letcher Circuit Court after pleading guilty to torturing and murdering a friend of his late daughter.

At a sentencing hearing on January 11, Letcher Circuit Judge Sam Wright ordered that 49-year-old Billy Joe Johnson must serve at least 22 years in prison for orchestrating the crucifixion and murder of 27- year-old Michael Ray Slone, also of Floyd County, on June 27, 2003. Wright was acting as special judge in the case.

Johnson, 49, of Bevinsville, a community near Wheelwright, was one of two men and two women involved in the murder of Slone, whom Johnson blamed for the death of his teen-aged daughter, Lekita Jo, who died of a drug overdose 11 days before Slone was killed.

Several members of Slone’s fam ily were present for the January 11 sentencing hearing, but did not address the court. Johnson, a heavy-set man with closely cropped hair, spoke little during the short hearing, answering only “yes, sir” when asked by Wright if he understood the length of the sentence could not be appealed under the terms of the agreement. 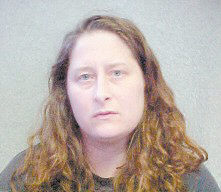 The remains of Slone’s body were discovered 38 days after he was murdered – and 35 days after he was reported missing – on an old strip-mine road off Kentucky Highway 7 at Topmost in Knott County, about eight miles from the Letcher County line. The body, lying face-down and clothed only in boxer shorts pulled down to the thigh area, was found 29 feet down an embankment by a Kentucky Power Company lineman. A Fossil brand watch was attached to one wrist of the body. Found lying nearby were one white K-Swiss brand tennis shoe and a pair of cargo shorts, a pocket of which contained Slone’s driver’s license.

On August 5, 2003, an autopsy was performed on Slone’s body by State Medical Examiner Dr. Cristin Rolf, but the cause of the death could not be determined. Six days later, Dr. Emily Craig, a forensic anthropologist in the medical examiner’s office, conducted further testing and determined that Slone died of “visceral,” or internal, injuries. Dr. Craig also discovered that Slone had been shot in the back.

After Dr. Craig’s findings, 19 months passed before an arrest was made in connection with the case. However, authorities were convinced of Johnson’s involvement as early as August 6, 2003, the day Johnson appeared in Floyd District Court to answer a charge unrelated to the death of Slone. While in the courtroom, Johnson spoke with Floyd County Attorney Keith Bartley and commented about the shooting of Slone – five days before Dr. Craig announced the cause of death.

Meanwhile, authorities were told Slone was last seen by his friends or family when he left the home of his girlfriend, Brandi Thornsberry, at 10:41 p.m. on June 27, 2003. Thornsberry told police Slone was driving a 1993 Chevrolet pickup when he left her home in Bypro at Wheelwright Junction, and was headed to the home of Mitzie Johnson of Hi Hat, the community where South Floyd High School is located.

Miss Johnson, 52, originally denied that Slone had been to her house. After police subpoenaed telephone records showing Miss Johnson had been in contact with Slone shortly before he disappeared, she told them she had been going to buy drugs and split them with Slone, but denied knowing anything about his disappearance.

The first real break for authorities investigating the case came more than a year later, on November 15, 2004, when Kentucky State Police Detective Randy Combs was notified by an agent with the Federal Bureau of Investigation, who said an informant had information concerning Billy Joe Johnson’s involvement in the death of Slone.

FBI Agent Dave Scott told Detective Combs that the informant, 56-year-old Randall C. Holbrook of Bevinsville, had participated in several conversations with Johnson concerning the Slone case. Holbrook, who was being investigated with Johnson and several others in an insurance fraud scheme, told the FBI that Johnson never told him he actually killed Slone, but “gestured” injecting something into his arm, cutting his throat, and shooting his head.

More than four months later, on March 22, 2005, the FBI was still investigating Billy Joe Johnson, Randall Holbrook, and seven other persons for committing insurance fraud in Pike, Floyd, and Boyd counties. On that day, the probe led Agent Scott to visit Susan Moore, who said she had been the girlfriend of Johnson until July 2004. While being interviewed about matters related to the insurance fraud investigation, Moore eventually began describing to Agent Scott how she, Billy Johnson, Mitzie Johnson and a fourth person, Chad Conn, carried out a plan to torture and murder Slone.

On March 23, 2005, Moore told Detective Combs and others that Slone was murdered because Billy Joe Johnson believed Slone was responsible for the death of Lekita Jo Johnson, who died of an overdose of the narcotic painkiller OxyContin on June 13, 2003. Moore said Slone had dated Lekita Jo, an 18-year-old graduate of South Floyd High School who had enrolled in Prestonsburg Community College after spending a short time at the University of Kentucky in Lexington.

Moore told authorities that on the night Slone was murdered, Chad Conn drove her and Billy Joe Johnson to the home of Mitzie Johnson. She said she and Billy Johnson hid in the basement while waiting on Slone to arrive under the belief he was there to conduct a drug transaction with Miss Johnson.

When Slone walked inside the house, Mitzie Johnson turned up the volume on her stereo to signal he was there. Billy Johnson and Moore, both wearing fullfaced toboggans and gloves, then walked up from the basement and acted as if they were there to rob Slone and Mitzie Johnson of their drugs and money.

After subduing Slone by hitting him in the head with a weapon fashioned from the handle of a pool cue, Billy Johnson tied Slone to a wooden cross that had been placed on the kitchen floor. He then injected two syringes of OxyContin into Slone’s arms.

Mitzie Johnson was also tied up so that she could claim a robbery had in fact happened if the plan for murder fell through.

Moore told authorities that after the drugs were injected into Slone’s arms, she and Billy Johnson “loaded” Slone into his pickup truck, which Johnson then drove to the strip-mine site at Topmost. Moore said she drove Conn’s vehicle and followed. She said that when they got to the site, they rolled Slone out of the truck and over the embankment. Moore said they drove the truck a short distance away before letting it roll over an embankment as well.

Moore said she and Billy Johnson returned to Floyd County that night, but drove Conn’s vehicle back to the Knott County site the next morning. She said Billy Johnson then used a long gun with a scope to fire a bullet into Slone’s body.

Moore, who is now 35, has pleaded guilty to murder, kidnapping, and first-degree assault in the case and is serving her sentence at the Kentucky Correctional Institute for Women at Peewee Valley.

Mitzi Johnson pleaded guilty to kidnapping and first-degree assault and is also serving a sentence at the Peewee Valley prison.

Conn, who later admitted to driving Johnson and Moore to the house where the murder took place, also pleaded guilty to kidnapping and first-degree assault but currently is not in prison. Conn told authorities he was reluctant to reveal information about the case because he was afraid of Billy Johnson.

In setting sentence for Johnson, Judge Wright followed the terms of the plea agreement between Johnson and prosecutors in Floyd County.

Wright ordered Johnson sentenced to 22 years of “hard labor” for the murder of Slone, 10 years for first-degree assault, five years for the unlawful imprisonment of Slone, and five years for tampering with physical evidence. Wright also ordered the sentences to be served concurrently, or at the same time. If Johnson violates his agreement not to attempt to have his case reviewed for parole consideration, Wright said the sentences would be served consecutively, meaning that Johnson would have to serve 42 years.

Johnson was given credit for the 1,002 days he served in jail between the date of his arrest and last week’s sentencing.

As a result of the FBI’s insurance fraud investigation, Johnson has also been sentenced to 60 years in federal prison after pleading guilty to conspiracy to commit mail fraud in connection with the arson of a home belonging to Douglas Branham.

Billy Johnson entered the guilty plea after his son, William Jason Johnson, joined Branham and Chad Conn in agreeing to testify against him after they each pleaded guilty to devising a scheme to burn down Branham’s house in 2002 and receive $72,000 in insurance claims.

Billy Johnson was also named in a federal indictment charging him and seven others, including Randall Holbrook, with conspiring to recruit people to stage automobile accidents and make false statements to police and insurance companies so that claims could be filed.