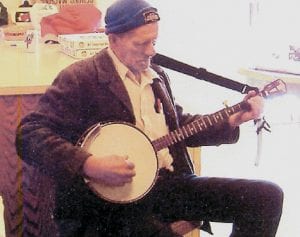 An elderly Partridge man was robbed of $19 before he was stabbed to death by a much younger assailant who “needed money for a pill,” a Kentucky State Police detective has testified.

Det. Randy Combs said during a preliminary hearing last week that 22-year-old Jonathan Keith Marlow murdered Hobert Elkins by stabbing him between 15 and 20 times after he saw “something green” inside a billfold Elkins was carrying.

“When we arrested Mr. Marlow he had $19. He had a $10 bill, a $5 bill and four $1 bills in his possession, all which appeared to have what looked like blood on them,” Combs said.

Combs was testifying before Letcher District Judge Jim Wood at a hearing held June 21 to determine whether there was enough evidence to continue with the case against Marlow, who is also from Partridge. Wood later bound the case over to the Letcher County grand jury after finding there is sufficient evidence to charge Marlow with murder, firstdegree robbery and first-degree burglary. Prosecutors are expected to seek the death penalty.

Authorities were told Elkins was murdered at 10:56 p.m. on June 16 when his niece, Geneva Combs, called the state police post in Hazard to report that Marlow had just killed her uncle and stolen his blue and white 1979 Chevrolet pick-up. His body was found in the bedroom of his locked house by KSP Trooper Ben McCray and Letcher County Deputy Sheriff Mike Rose.

Marlow was arrested without incident after he went to the home of another Partridge couple, Kathy and Neil Creech of Elkins Branch, and asked them to tell police he was ready to surrender after he had run from them earlier.

Marlow apparently left the crime scene in a manner he hoped would convince authorities that he had killed Elkins in self defense.

According to Combs, Marlow first told police he killed Elkins after Elkins invited him into his home and pulled a pocketknife on him. Marlow said he took the knife from Elkins and killed him with it.

“During that interview, Mr. Marlow (said) he was walking down the road near Mr. Elkins’s residence and Hobert Elkins invited him inside … to discuss selling a pick-up truck stated that while he was inside, Mr. Elkins offered to give him a soda pop, went out of the room, came back, and when he came back he produced a pocketknife.”

Combs testified that a pocketknife was found in the left hand of Elkins when his body was found by Trooper McCray and Deputy Rose, but that medical examiners said there was no way that knife caused the fatal wounds to his heart and lung.

“The only blood on that knife was on the handle of the knife. The pocket knife was found in Elkins’s left hand and Elkins is right-handed,” said Combs. “The blade on the pocketknife was an inch and a half long. That blade could not have caused the two fatal wounds.”

Combs said Marlow also claimed he threw the murder weapon away while running from police shortly after the stabbing, then admitted he had hidden the knife behind a television set in the Creech home. Combs said knife found behind the TV – which he described as a “scabbard” knife – had a blade that measures between five and six inches long.

“He changed his story multiple times,” Combs said. “He changed it from Mr. Elkins invited him in to later that Mr. Elkins wasn’t home the first time that he went to his residence.”

Combs said Marlow later told authorities “that he needed money, went to Mr. Elkins’s residence and kicked that door and attempted to get inside, but he did not get inside (and) went back up to the roadway and waited for Mr. Elkins to get home. At that point he went back.

“He stated that he needed money for a pill,” Combs continued. “He went inside and asked Mr. Elkins for money.”

Combs said Marlow told him the attack began after Elkins retrieved his wallet and Marlow saw “something green” inside.

“Marlow grabbed the wallet from him and stated at that point that he stabbed him seven or eight times, leaving the knife in Mr. Elkins,” Combs said. “He stated that as he started to walk away Mr. Elkins removed the knife (and) started to get back up. He kicked him again.”

Combs said that when Trooper McCray and Deputy Rose found Elkins lying in the floor of his bedroom the “right rear pocket of his pants had been pulled out and so had the pockets of his sport coat that he had been wearing. … Mr. Elkins’s wallet was lying on his bed above him with blood on it, no cash inside.”

Combs said blood was found on several items in the bedroom.

Combs said Elkins’s residence has three entrances and one of the doorknobs had blood on it.

“On one of the doors the inside doorknob was covered in blood. It was obvious a hand had been on it – smudged fingerprints,” said Combs.

He said he found two dusty footprints on a door.

He said the footprints contained two distinctive stripes from a shoe that bears strong resemblance to those worn by Marlow.

Other than cash and a pick-up truck, Combs believes the only other thing stolen from Elkins was a small pellet rifle found in the pick-up truck. Family members said Elkins usually kept the rifle in his house. Combs said friends and family are going to go through the house in an effort to determine what else might be missing.

Combs said Marlow had small wounds on his right arm when police found him on June 14, and that he was taken to the Whitesburg hospital for treatment.

Marlow is being represented by Richard Counts, a public defender from Hazard, and Whitesburg attorney Will Collins.