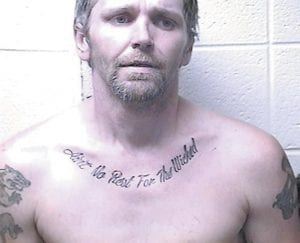 Moore, of Mallie in Knott County, used a six- or seveninch bolt sharpened at one end to break open a part of fencing that encloses the recreation area located on the roof of the courthouse, said Letcher County Jailer Don McCall. McCall said Moore unraveled a splice in the chain link fence that had been repaired after an inmate cut with fence with wire cutters back in 2000.

Moore then slid down a flagpole in the front of the three-story building. The escape happened around 7:20 p.m. on July 20.

Surveillance video footage at Community Trust Bank is being subpoenaed to determine if Moore stole a vehicle from the bank.

Moore is a 36-year-old white male with brown hair and green eyes. He stands 5’10”, has a fair complexion and a medium build.

The case is still under investigation. Anyone with information of Moore’s whereabouts is asked to call Kentucky State Police at 606-435-6069.