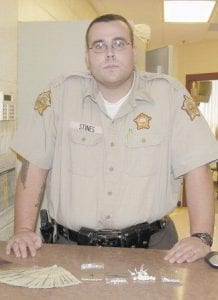 Police say a Haymond man was trying to trade drugs for sexual favors when he was arrested in a Neon parking lot last week.

Paul Mullins, 66, was arrested in the parking lot of the Dollar General Store at Neon Junction after Letcher County Sheriff’s Deputy Mickey Stines said he saw Mullins shaking a pill bottle at two women. Stines said that when he approached Mullins he also saw four small bags of a white powdery substance believed to be cocaine.

Mullins later gave a statement to police saying he had arranged to exchange the cocaine for sex, said Deputy Brian Damron.

The Xanax and OxyContin pills were found on Mullins during a search at the Letcher County Jail. Damron said $1,058 in cash was also found on him.

Damron is in charge of the investigation.