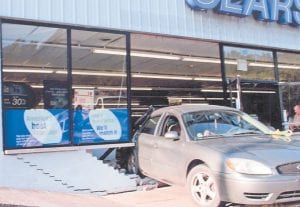 Kelvin Eldridge, owner of the Sears store at Mayking, took this photo after a vehicle backed through the window of his store after leaving Dollar General Store next door.

A Blackey woman was arrested Thursday evening after backing her car into the Sears store at Mayking.

Wendy Kimbley, 46, of 13179 Highway 588, was charged with operating a motor vehicle under the influence of alcohol or drugs (first offense) and first-degree wanton endangerment.

Kimbley told police she was backing up and didn’t know what caused her gold, 2004 Ford Taurus to hit the Sears building, according to a written citation.

Store clerk James Gose was the only person inside the building when the incident occurred around 5:45 p.m. on Aug. 29.

Kelvin Eldridge, owner of the Sears store, said Gose looked out the window and watched the car as it continued coming toward the store after backing out of a parking space at the Dollar General Store located next door in the Mayking Mall.

The car “jumped” a six- to eight-inch curb and crashed backward into the Sears building, Eldridge said.

About 16 feet of window was broken and two feet of concrete located underneath the window was damaged, Eldridge said.

Five or six washer and dryer sets were damaged, Eldridge said, and he estimates that several thousand dollars worth of damage was done to his store.

“If anybody had been in here they would have been hurt bad,” said Eldridge. “I’m real thankful no one was in here.”

The passenger in Kimbley’s car, Frank Darrell Perry, 56, of 11 High Knob, Millstone, was arrested and charged with public intoxication (controlled substance excluding alcohol). Perry was released from the Letcher County Jail on August 30. His surety bond is set at $5,000.

Kimbley remains in jail. Her bond is $5,000 cash with home incarceration.

“I don’t ever remember something like this happening,” said Eldridge.

Sears was open for business Friday, the day after the accident. 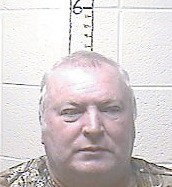