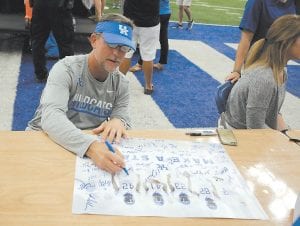 Offensive coordinator Eddie Gran was popular on Fan Day and says he has enough receivers and running backs that if someone plays poorly, they won’t stay in the game. (Photo by Vicky Graff )

Which game on the Kentucky football schedule should be considered the key game to UK’s success this year?

That’s the question I posed to various media members who cover Kentucky football on a daily basis to give you an idea what they were thinking as the Cats prepare to open play Saturday night against Southern Mississippi.

Here’s what the media members had to say.

Jeff Drummond, Publisher, Scout.com/ AllWildcats.com: “There are two or three really good options I could go with here, but I really feel like the Mississippi State game on October 22 at Commonwealth Stadium could be the key to the season. The Bulldogs have had the Wildcats’ number for seven consecutive years, and that’s something that should NEVER happen in this series.

“Stoops & Company have to find a way to end that skid in a year where MSU is expected to be in a transitional season without UKkiller Dak Prescott at quarterback. If the Cats get that one, they could realistically be five and two (or bet- ter) and take positive momentum to Mizzou the following week to lock up a bowl bid. Given what has happened the last two years, it would be good to put that status away early.”

Freddie Maggard, Kentucky Sports Radio football analyst: “Easily Southern Mississippi. If UK wins week 1 then it will prove it can beat comparable opponents Vanderbilt, South Carolina, Mizzou, and Mississippi State. Plus to re-engage it’s ‘wait and see’ fan base, a win over Southern Miss is mandatory.”

Keith Taylor, Kentucky Forward: “The key game will be the Vanderbilt game at Commonwealth Stadium on October 8. If Kentucky can win three of the first five games, not to mention a possible upset at Florida to end a horrendous streak, the Vandy game will set the tone for the second half of the season. A win over the Commodores would give UK momentum with games against Mississippi State and Missouri the following two weeks. Three victories in those three games would give UK the six wins needed to qualify for the postseason with four games remaining in the regular season, including two at home.”

Tom Leach, UK Radio Network: “It’s easy to make the case that the ‘key’ game is the opener against Southern Mississippi. With all of the discussion of improvement in the program, particularly on the offensive side, a strong showing and a victory in the first game serves as validation of that renewed hope. A loss in game one, albeit against a very good foe, would bring about a wave of negativity for the players and coaches to deal with and that would quash all of the optimism that comes with a new season so that puts the opener at the top of the list of key games.

“However, the true ‘key’ game is whichever one can get them to six wins and a bowl game — and you can still do that without winning the opener, although you’d be hard-pressed to make that sale to most fans. Kentucky teams in 2006 and 1976 ended long bowl droughts in year four of a coaching regime and both teams were much better in the final month of the season than in the first. It’s quite possible the same will be true for this team with a quarterback who enters the season having started only two games, but it sure would make an optimistic scenario much easier to buy into if the Wildcats do get that victory on September 3.”

Larry Glover, LarryGloverLive: “The opener against Southern Miss is the most important of the season. A loss right out of the gate would be disastrous. A defeat to the Golden Eagles, coupled with an end of the season road trip to Louisville, would mean that the Cats likely would need a 4-4 SEC campaign to go bowling. That seems very unlikely.”

Dan Rieffer, FOX 56 and ESPN 1300 (AM): “I could make a case for three or four games. But I have to go with Louisville. There are five games in which UK figures to be favored: Southern Miss, New Mexico State, South Carolina, Vanderbilt and Austin Peay. So, for the third straight season, UK’s bid to break its five-year bowl drought could come down to that final game against the Cardinals.

“Let’s say the Cats win those aforementioned five games and throw in a road win at Missouri and/or an upset of Mississippi State. In that scenario, UK would enter the Louisville game at 6-5 or 7-4, with a win over the Cards giving the Cats the potential for an eight- or nine-win bowl championship season. Or lose to Louisville. Lose the bowl game. All of the sudden 6-5 turns into 6-7, which would be Kentucky’s seventh straight losing season and result in another offseason of selling, ‘We’re making progress.’”

What do you think? My feeling is that if UK cannot beat Southern Mississippi, then forget any bowl talk. No disrespect to Southern Miss, which is actually rated above UK in some preseason rankings, but that’s a game UK has to win to even talk about a bowl.

Myself, I think the Mississippi State game is key. That’s a game UK just cannot lose every year, but it has been doing just that. If the Cats can win that game, it could change not only this year but future seasons, too.

Perhaps the biggest concern for Kentucky going into the season is the defensive line where coach Jimmy Brumbaugh once again has to try and rebuild. While much of the preseason attention has been on nose guard Matt Elam and his weight, the player to watch could be tackle Courtney Miggins.

He came to UK from Pearl River Community College last year and played in 11 games and made 12 tackles.

“Courtney Miggins is a player that didn’t get here until August last year and was a second team player the whole season last year,” Kentucky defensive coordinator D.J. Eliot said. “This year he’s been in that starting role.

It’s never too early for a NBA mock draft analysis like the one that Chad Ford put out August 1 and now has already updated it to include three Kentucky freshmen in the top 15.

He has guard De’Aaron Fox going No. 10 to the Milwaukee Bucks, guard Malik Monk going 14th to the New York Knicks and Bam Adebayo going 15th to the Washington Wizards where he would join former Wildcat John Wall.

Ford compared Fox to Wall — guess he’s been listening to John Calipari — and said Monk would be a great long-term addition for the Knicks. He also said that you cannot teach the toughness and motor that Adebayo has, again the same things that Calipari has been telling UK fans for months.

Again, it’s way too early for this, but it does show how highly regarded UK’s freshmen are going into the season.

Not everyone will agree with Derek Willis not being forced to miss any games next season because of his June arrest on a charge of alcohol intoxication in a public place after being found passed out in the street of a vehicle in Boone County. However, that’s Calipari’s style and he said when he came to UK he would never throw a player “under the bus” and prefers to handle discipline his way.

Do not doubt that Willis has been punished, but Calipari said last week that missing games would not be part of that punishment.

“We deal with every situation in its own way. We gather the information. … I’m not going to tell you specifically what we did and didn’t do. I’m not going to write your stories and do all that stuff. But obviously he (Willis) and I have talked a few different times. Derek knows that he’s under a different eye now than he was,” Calipari said.

That’s both true and fair. Everyone deserves a second chance, but don’t ask for a third. Calipari said UK players have to understand the spotlight they are in on and off the court.

“You can’t talk your way out of it. And that includes our staff. I can’t go anywhere that they’re not taking pictures of me sending them somewhere,” the UK coach said. “Then I got to explain when my wife calls me and says, ‘You didn’t tell me you were in L.A.’ Like, what do you mean? ‘Somebody took a picture with you and …’ ‘Well, I’m out recruiting, what are you talking about? I’ve been in three states today,’” Calipari said.

Freshman Sacha Killeya- Jones may need time to adjust on the basketball court this season. However, my guess is that he is not having as much trouble academically because of his time at Virginia Episcopal School.

“It was pretty challenging academically,” he said. “We had two hours of study hall Sunday through Thursday plus daytime study hall. It was definitely a challenging school for me but it was also good for me.”

He felt playing in all-star games last spring with future Kentucky teammates was good for him as well and came away impressed with guards De’Aaron Fox and Malik Monk.

“Fox is a really good oncourt leader. He is going to run the team really well,” Killeya-Jones said. “Monk shoots really well and he can jump out of the gym. He is just a crazy athlete. Both of them are impressive and are going to be really impressive for us.”

Offensive coordinator Eddie Gran is refreshing when it comes to dealing with the media. Ask him a question, expect an honest answer. That’s why I was interested in what he thought about UK’s depth going into the season.

“ We have a decent 2-deep on the O-line. (Assistant coach) John (Schlarman) has done a nice job of moving guys around, if you’ve got an emergency situation. So he would put some guys at center, some guys at tackle. And we’ve been able to do that in camp, which you have to do,” Gran said.

“I think the receivers and running back corps have really just pushed each other. So, now, if somebody’s not getting it done, or they’re not doing it the right way or they’re not doing it our way, we can pull ‘em. And we can say, ‘Hey, you know what? If you don’t want to do it this way, then we’ll let another guys step up.’ And that’s a good thing.”

And an unusual thing for Kentucky