Many children with Medicaid not getting needed dental care 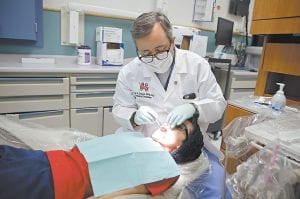 Dr. Juan Fernando Yepes, a dentist at the Riley Hospital for Children Department of Pediatric Dentistry, checks the teeth of Justin Perez, 11, during an office visit in Indianapolis. Medicaid covers dental care for an estimated 37 million children from low-income families. The state and federal Medicaid program varies by state, but there are national shortages of dentists who participate. (AP Photo)

Three out of four children covered by Medicaid in four states didn’t receive all required dental care over a recent two-year period, according to a federal report that recommends a government push to improve access to care.

One in four such kids didn’t see a dentist at all, the Health and Human Services inspector general’s office said this week. Among the reasons were that there were too few dentists accepting Medicaid patients and a lack of education about the importance of proper dental care.

In 2007, 12-year-old Deamonte Driver of Maryland died from an infection that started in an abscessed tooth, turning national attention to a longstanding economic disparity in children’s oral health. This week’s report sends a message that the problem still exists.

Investigators looked at Medicaid dental claims for 2011 and 2012 in four states: California, Indiana, Louisiana and Maryland. The states serve about onefifth of all children with Medicaid and are thought to be representative of the nation as a whole.

Problems haven’t improved with more coverage under President Barack Obama’s health overhaul, experts said. The Affordable Care Act’s insurance expansion, which began in 2014, has only meant there are more families competing for the limited number of dentists participating in Medicaid, said Meridith Seife, a deputy regional inspector general who worked on the report.

“We found a significant number of children, 28 percent, who didn’t receive any dental services over a two-year period” despite being continuously enrolled in Medicaid, Seife said. “We found that to be a huge, huge problem.”

Medicaid covers dental care for an estimated 37 million children from low-income families. The state and federal Medicaid program varies by state, but there are national shortages of dentists who participate.

Medicaid pays about half what commercial insurance pays for pediatric dental services, according to the most recent survey by the American Dental Association, which says more dentists participate in the program when rates increase.

A lack of dental care can lead to infections that require emergency room visits and expensive repairs.

In New York, Dr. Amr Moursi recalled treating a 3-year-old patient, a girl whose baby teeth were so severely decayed and infected that he had to remove all 20 of them in an expensive surgery under full anesthesia. It’s an extreme example of how constant snacking and sipping from a bottle or cup can bathe a child’s mouth in bacteria-feeding carbohydrates, Moursi said. The girl, now 7, is doing well, her adult teeth healthy thanks to regular preventive care.

“We need to get children who are enrolled and eligible for services to actually get them,” said Moursi of New York University College of Dentistry, who was not involved in producing the report. He also is a national spokesman for the American Academy of Pediatric Dentistry.

The states had adopted the American Academy of Pediatric Dentistry schedule requiring exams and cleanings every six months.

But Indiana and Louisiana had coverage policies that didn’t allow Medicaid payment for particular services in the established schedule. The coverage policies “were impeding children from getting the services they need and were required to get,” Seife said.

The report recommended requiring states to create action plans and more tracking of delivered care. The Centers for Medicare and Medicaid Services agreed with most of the recommendations, but said it didn’t want to add tracking requirements to what’s already required of states.

CMS spokesman Aaron Albright said the agency is “working with states to decrease barriers and seek ways to increase the number of providers.” From 2007 to 2014, 60 percent of all states achieved at least a 10 percentage point increase in the proportion of enrolled children who received a preventive dental service during the year, Albright said.