Many factors at play in recruitment of Allen 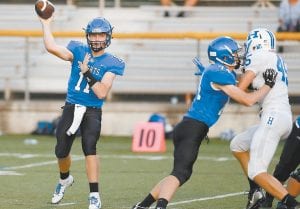 His dad played quarterback at Kentucky after a record-setting high school career at Morgan County. He grew up a Kentucky fan and his former high school coach, Mark Perry, is now on Kentucky coach Mark Stoops’s staff.

Still, Lexington Catholic quarterback Beau Allen has not let his father’s legacy or the proximity to the UK campus to overly impact his recruiting. He has offers from Michigan, West Virginia, Washington State, Georgia, Maryland, Duke and Penn State along with Kentucky and others.

Allen expects to make a college choice in the next six weeks or so. He visited Washington State and then was at Kentucky last weekend. He expects to also visit West Virginia, where former UK offensive coordinator Neal Brown is the new head coach.

“I could decide earlier, but I don’t want to rush anything,” said Allen. “If I set a specific date, I might feel some pressure just to decide.”

It was only a few months ago that his friend, Frankfort Western Hills standout Wandale Robinson, set a recruiting date and announced for Kentucky. A few days later he switched his commitment to Nebraska.

Allen and Robinson had openly talked about playing together in college before Robinson eventually signed with Nebraska and will be a freshman this season.

“It was tough on him. I know how your mind feels some days about what you want to do and then the next day it can change,” Allen said. “It’s just something you really have to think about. I’m just going to go with the flow when the right time comes.”

He says there is not one specific factor that will separate one team from the others for him.

His father, Bill, threw for 6,440 yards and 42 touchdowns at Morgan County at a time when those were gaudy career numbers. He opted to sign with UK and coach Jerry Claiborne, a coach who preferred a running game, and played only sparingly at UK. Beau Allen’s uncles, Hanky and Perry Allen, were also both prolific passers at Morgan County.

Perry, a former UK quarterback, left Lexington Catholic to become Brown’s director of football administration at Troy after Allen’s sophomore season. He moved with Brown to West Virginia before Stoops gave him a chance to return to Lexington as an offensive analyst.

“Coach Perry is good to talk with about everything in recruiting,” Allen said. “I have been in contact with him. We talked often when he was at Troy and then West Virginia and now Kentucky.”

Allen admits he has a “good bond” with Stoops and his staff.

“I have also grown up a Kentucky fan and followed the program for a long time,” Allen said. “I get a lot of encouragement from fans to say yes to Kentucky but it is not pressure. They are all good people and I appreciate that they care. It means a lot to me that they want me to go to Kentucky.”

Allen knows he could become the “face” of UK’s 2020 recruiting class if he committed early. He’s rated as one of the top 10 players in Kentucky, and a quarterback commitment always carries extra weight.

“I will welcome that opportunity for any school,” he said. “I look forward to being a really strong recruiter and promoter of a great program that I pick. I do talk a little bit now to different players to see what they are thinking.”

He’s not sure what he’ll do about attending camps this summer after he makes his college choice. He knows it could be “fun to be a recruiter” for the school he picks during summer camps but also admits his competitive nature would make him still want to do well in any camp he attended.

“I don’t think there is ever a time not to compete as hard as you can and show all you have got,” he said.

He was the first UK player ever to have three straight 1,000-yard rushing seasons. He ranked in the top 10 nationally in rushing in 2018 with 1,449 yards after being considered a “mid-level” recruit coming out of high school. Yet he’s now the 12th all-time leading rusher in SEC history and trails only Herschel Walker (49) for most rushing touchdowns prior to his senior season in SEC history.

However, rather than look at what he did three years against Southeastern Conference defenses, most NFL teams focused on what Snell did at the NFL combine, where they didn’t think he was quite fast enough or strong enough to be a big-time pro player. Pittsburgh took a different approach and drafted Snell in the fourth round with the 122nd overall pick.

Steelers coach Mike Tomlin said they did not “over analyze” Snell, the only SEC player other than Herschel Walker to rush for at least 1,000 yards and 14 touchdowns in their first three seasons.

“We just really liked Benny Snell. He is a good football player who we thought was a central figure in a culture change there at Kentucky,” Tomlin said. “That guy had those guys extremely competitive and they kicked a lot of butt in the SEC.

“Everyone you talked down there formally and informally talked about him being an energy bringer, a catalyst He is the type of guy that is capable of changing a culture and we were really attracted to that along with his run talents. We’re glad to have him.”

Quote of the Week: “We expect him to be able to be on the edge no matter what you line up with,” Jacksonville executive vice president Tom Coughlin on Josh Allen after the Jags picked him No. 7 in the NFL draft.

Quote of the Week 2: “You know he’s going to be hard to replace, but I’m going to go out there and do me. I’m going to try to bring as much to the table as I can and you know, hopefully break his record,” Kentucky running back A.J. Rose on following Benny Snell’s record breaking career at UK.

Quote of the Week 3: “What I loved about him this year is he did go up and down like a rookie should. But he never stayed down. So that’s the growth. The mental focus stuff, he’ll tell you, like, he’s got a long way to go there. But the talent and just the straight-up play, he’s going to be an amazing player. And he wants to. He’s coachable. Works hard, low maintenance. Hope that continues,” Los Angeles Clippers coach Doc Rivers on former UK star Shai Gilgeous-Alexander’s rookie season.