Many here will hear cicadas sing love songs for 4 weeks 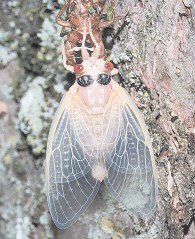 A cicada emerges from its shell. The insects are expected to be in full activity for at least four weeks. (AP)

Many Letcher County residents may soon begin hearing the scratching and buzzing of a 17- year periodic cicada known as Brood XIV.

The grasshopper-like insects are expected to be fully emerged from the ground by the end of this month, and will be in full activity for about four weeks.

While the emergence of Brood XIV is expected to affect most of eastern Kentucky, it is not clear how widespread the emergence will be in Letcher and Harlan counties.

While it’s a certainty cicadas don’t know where county boundary lines are, it is not unusual for a periodic emergence to occur in one county while a neighboring county sees nothing.

“Nine of the periodic cicada broods are known to inhabit Kentucky,” says a report prepared by the University of Kentucky College of Agriculture. “Some are found in only a single county, while two are almost statewide.”

In the year 2017, for instance, Letcher County is being forecast by UK entomologists as the only Kentucky county that will see an emergence of the Brood VI cicada. In the year 2012, Trimble County, located on the Ohio River on the western side of northern Kentucky, may be the only Kentucky county to experience an emergence of Brood I – unless it also emerges in Letcher, Harlan, Pike and Martin counties. 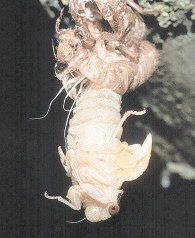 As the 17-year periodic cicadas begin to emerge this summer in 13 states, most people find the brash noise the insects make to be annoying, but entomologists say that the loud sound is really a love song. (AP Photo/Frank Hale)

With the current emergence of Brood XIV affecting 13 states from Georgia to Massachusetts, entomologists remind us that the brash noise being made by the cicadas is really an insect love song.

“It’s the men’s glee club serenading the ladies,” said Dr. Frank Hale, with the University of Tennessee Extension in Nashville. The periodic cicadas are a phenomenon of the hardwood forests of the eastern U.S.

While cicadas get turned on by the sound they emit from two drum-like membranes on the abdomen, humans find it shrill, loud and annoying.

“The more common species sound as if we were to pronounce ‘Pharaoh’ and extend it at the end,” Hoover said. “Then there’s another that’s a series of ticks and buzzes, and yet another sounds like a water sprinkler.”

The female cicadas’ response to this courting is subtle. A demure flick of wings indicates a female is ready to mate, Hoover said.

Beyond the noise, people can be unsettled by the 1-1/2-inch bugs’ red eyes (except for rare white-eyed ones), their clumsy flight and what Hoover calls their tendency to assume anything upright is a landing spot.

But cicadas can’t bite or sting even when they light on you, he assures.

“The (American) colonists thought they were witnessing a locust plague,” Hoover explained.

Locusts, however, are more like grasshoppers, which eat grasses and crops, Hoover said. Cicadas suck nutrients from trees, but usually do little damage.

The adults emerge from the ground, sing, mate and die, all within a few weeks.

The new cycle begins when the nymphs hatch in twigs up in the trees, fall to the ground and burrow in. They will feed on the roots of the trees for the next 17 years.

And what’s the point of all of this?

“The whole idea in nature is to reproduce,” Hale said.

Burrowing in the ground also protects the nymphs from predators.

After the cicadas reach full emergence, probably by the last week in May, humans can expect to hear them for a period of four weeks.

While it’s true that tender young trees can be damaged by the cicadas, the insects also provide benefits to nature.

The holes from which they emerge aerate the soil around the tree roots, Hale said. The mil- lions of decaying cicada bodies supply nitrogen and other nutrients, which rain washes down the holes to the tree roots.

For birds and other small animals, the cicada emergence is a smorgasbord.

Regardless of how much predators gorge themselves, the cicadas will prevail.

“Their strategy is to overwhelm by their numbers,” Hale said. “It’s ‘shock and awe.'”

Hoover said he has been getting increasing calls from Pennsylvanians spotting the mud turrets cicadas make in damp ground as they prepare to emerge from the soil.

The entomologist is also the faculty adviser to the Penn State Flyfishing Club. He said fishermen are ready to cast dry flies resembling cicadas into trout streams, expecting a great catch.

While some people might see the cicadas as an annoyance, Hale has a decidedly different view.

“This is the best time ever for an entomologist,” he said, explaining it’s a great educational opportunity and people get to see something they won’t often witness.

People who don’t get their fill of cicadas this year have only to wait until 2025 when Brood XIV returns.

On the Net: http:// www.cicadamania.com